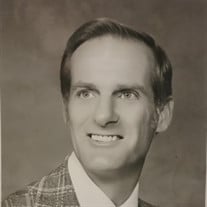 William M. Scheetz, 90, of Lancaster and formerly of Wrightsville went home to be with the Lord on February 27, 2021 at The Mennonite Home. He was the husband of Barbara Ann (Hoover) Scheetz. Bill and Ann celebrated their 66th wedding anniversary on August 20, 2020. Born June 17, 1930 in Harrisburg, he was the son of the late Milton Daniel and Leona (Smith) Scheetz. Bill was a U.S. Army veteran serving in the Korean War and was honorably discharged in 1952. Bill was a 1948 graduate of John Harris High School in Harrisburg and a 1967 graduate of Shippensburg State College with a master’s degree in Business Education. Bill taught typing and shorthand at Eastern High School until his retirement in 1986. After his retirement Bill and his wife Ann traveled throughout Europe and the United States. They enjoyed vacationing at the beach in the summers with their family. He was a member of the Riverside Lodge #503 F. & A.M. from 1993-1995 on Cool Creek Road, Wrightsville. Bill was also a past commander for the Abel-Poff-Leithiser American Legion Post 469 of Wrightsville. He was also very active in the Wrightsville Rotary Club. Bill loved the Lord and served as an elder at the First Presbyterian Church of Wrightsville. He later became a member of Faith Bible Fellowship Church Lancaster where he remained until his death. He loved all sports, especially the Eagles and the Nittany Lions of Penn State. In his later years he found joy spending time with his children and grandchildren. In addition to his wife, Ann, Bill is survived by his daughter, Nancy Shorter and her husband, Timothy of Columbia; 8 grandchildren. Alston Ellis and Abriel Simpson, Nathan, Jasmine, Devon, Isaiah, Aidan and Ariana Shorter. 3 great grandchildren; and a sister, Beverly Howe. He was preceded in death by his daughter, Andrea Howard. A memorial service will be held Saturday, March 6, 2021 at 11:00 a.m. at Faith Bible Fellowship Church Lancaster, 151 Donnerville Road, Lancaster, PA 17603. Pastor David Thomann will be officiating. A visitation will be Saturday from 10:00 a.m. to 11:00 a.m. at the church. A graveside memorial service at Fairview Cemetery in Wrightsville will be held at the family's convenience at a later date. Arrangements by the Etzweiler Funeral Homes and Cremation Service, 700 Hellam St. Wrightsville, PA 17368.

William M. Scheetz, 90, of Lancaster and formerly of Wrightsville went home to be with the Lord on February 27, 2021 at The Mennonite Home. He was the husband of Barbara Ann (Hoover) Scheetz. Bill and Ann celebrated their 66th wedding anniversary... View Obituary & Service Information

The family of William M. Scheetz created this Life Tributes page to make it easy to share your memories.

William M. Scheetz, 90, of Lancaster and formerly of Wrightsville...

Send flowers to the Scheetz family.