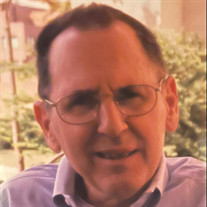 William John Holland, 81 of York, PA, died at his residence on February 26, 2022. He was the husband of Sylvia Mae (Kerper) Holland with whom he observed their 53rd wedding anniversary on June 8, 2021. Born September 21, 1940 in Lacon, IL, he was the son of the late John Densel and Helen Jean (Anderson) Holland. Bill moved to York in 1952 when his father was transferred to the new Caterpillar plant. He was a 1958 graduate of William Penn Senior High School. He proudly served in the United States Coast Guard, attended Drexel University, York Junior College (now York College of PA) and graduated from Millersville State College (now Millersville University) in 1968. Bill was a member of Calvary United Methodist Church in York, the York Art Association, a juried member of The Pennsylvania Guild of Craftsmen as well as the Yorktowne Chapter and charter member of the Yorkarvers. He considered his greatest accomplishment, with his father, building the house that he and his wife have shared for over 50 years, as well as many beautiful pieces of furniture within. In addition to his wife, Bill is survived by his brother-in-law and sister-in-law, Albert and Kathie Kerper and a niece, Luisa Kerper all of Lansdale, PA. There are also many cousins scattered throughout the Midwest. Following cremation, a memorial service will be held at 11:00 a.m. Friday March 18, 2022 at Calvary United Methodist Church, 11 N. Richland Ave., York, PA with Pastor Tanya L.H. Brubaker officiating. A visitation will be held from 10:00-11:00 a.m. Friday at the church. Burial will in the Garden of Memories at Central Schwenkfelder Church Cemetery in Worcester, PA at a later date. In lieu of flowers, memorial contributions may be made to the “Restoration Fund” at Calvary United Methodist Church, 11 N. Richland Ave., York, PA 17404, to help with significant damage the church suffered as a result of Hurricane Ida. Arrangements by the Etzweiler Funeral Homes and Cremation Service, 1111 E. Market St. York, PA 17403

The family of William John Holland created this Life Tributes page to make it easy to share your memories.

William John Holland, 81 of York, PA, died at his residence on...

Send flowers to the Holland family.