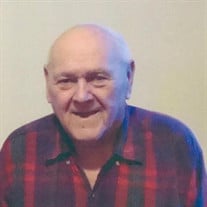 Wayne A. Nary, 89, of York, died peacefully on Thursday, August 19, 2021 at Pappus House, York. Born in Orrtanna on June 2, 1932, he was the son of the late Cleon and Viola (Herring) Nary. Wayne was the loving husband of the late Dolores F. Nary, who preceded him in death on June 18th of this year. Wayne was a US Army Veteran of the Korean War. Following his time in the military, he started Nary’s Cleaning Service, focusing on carpets, floors, and upholstery. Wayne was a member of the VFW and the September House Senior Center. He enjoyed country music and his candy, and loved to watch the sprint cars at Lincoln Speedway. Wayne is survived by his daughters, Patty M. Dietch, and her husband, Steve of Lancaster and Shirley Nary Loeffler and her husband, Jeff Christner of Lancaster; his son, Michael Nary of Lancaster; his step-children, Linda A. Jackson and her husband, Jeff of Seven Valleys, Robert J. Stambaugh and his wife, Jean of Manchester, Ray D. Stambaugh of Manchester, and Donald E. Sprigle of Thomasville, NC; his grandchildren, Tiffanee Wright, and her husband, Albert, Christina Schoffstall and her husband, Steve, Kyle Dimitris and his wife, Heidi, and Doug Loeffler and his wife, Brittany; his 6 great-grandchildren and several step-grandchildren. He is also survived by his sister-in-law, Martha Nary and his nieces, Debbie Hoffman and her husband, Charlie and Connie Grimm, wife of the late Clyde Grimm. He was preceded in death by his siblings, Mazie Keefer, Gerald Nary, and Nadine Guise. Wayne’s family would like to thank the staff of Pappus House for the love and care shown to Wayne and the entire family during this difficult time. A graveside service to celebrate Wayne’s life will be held Wednesday, August 25, 2021 at 2:00 pm in Susquehanna Memorial Gardens, 250 Chestnut Hill Road, York. Military Honors will be conducted by the York County Veterans Honor Guard. Those attending the service are asked to meet at the main entrance to the cemetery on Wednesday by 1:45 pm. In lieu of flowers, contributions in Wayne’s memory may be made to Pappus House, 253 Cherry Street, York, PA 17402. Arrangements by the Etzweiler Funeral Homes and Cremation Service, 1111 East Market Street, York, PA 17403.

Wayne A. Nary, 89, of York, died peacefully on Thursday, August 19, 2021 at Pappus House, York. Born in Orrtanna on June 2, 1932, he was the son of the late Cleon and Viola (Herring) Nary. Wayne was the loving husband of the late Dolores F.... View Obituary & Service Information

The family of Wayne A. Nary created this Life Tributes page to make it easy to share your memories.

Send flowers to the Nary family.