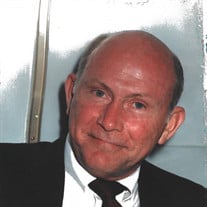 Walter Thomas “Tom” Klinedinst, Jr., died on Wednesday, January 20, 2021 at UPMC Memorial Hospital. He was the husband of Joann L. (Bentzel) Klinedinst to whom he was married for 60 years. Born on January 6, 1938 in York, Tom was the son of the late Walter T. and Edith (Wintermyer) Klinedinst. Tom’s father, a minor league baseball catcher, helped Tom develop an early passion for playing baseball. He was very proud of pitching the championship game in 1950 for York in the Mason Dixon Tournament which York won 5-4. Later, he went on to play high school sports at York High. He was a very proud York High Bearcat. His high school baseball team won the Central Penn League Championship in 1954. After high school, he played for the Pleasureville Hawks in the Central League. One season, he led the league in batting. He also played basketball and golfed at York High. Tom later coached baseball for Pleasureville in the Eastern York County Baseball League. After high school, Tom attended York Junior College and studied business management. He earned an Associate Degree, and then attended the University of Denver to pursue a degree in Marketing. He graduated in the winter of 1960. He liked to share that he worked his way through college by working many hours at Sears and Robuck. Upon graduation, he returned to York and enlisted in the US Marine Corps. After his military service, Tom became a salesperson for the Colgate Company. Later, he sold industrial supplies for Ehrenfeld Company. This job development led to a lifelong interest in machine tooling. In 1970, Tom and his business partner, Robert Gantz, purchased Petry & Morrow Inc, an industrial distribution company. The company began with 2 employees and grew to employ over 50 employees. Later, they had the opportunity to build a new facility on Voglesong Road. This was a very proud moment for both Tom and Bob. Tom held the position of President of the Industrial Distribution Association and he was a member of the Manufactures’ Association. Upon retirement, he established Plant Resources, which enabled him to remain active in the manufacturing community. While in high school, Tom developed a passion for the game of golf. Tom won several flight championships, the Presidents Cup, the Member/ Member Tournament, and the Member/Guest Tournaments at the Outdoor Country Club. He was a lifetime member of the Outdoor Country Club. However, his greatest golf passion was sharing fellowship with his golf buddies. He enjoyed playing new courses and particularly looked forward to his golf trips to Myrtle Beach. Golf was more than a sport; it was an opportunity to spend time with his closest friends. Tom was very dedicated to his church and was a member of the First Church of the Brethren of York for 60 years. He served as an usher and head usher for many years. Tom and Joann developed many dear friendships with fellow church members. Tom made a personal commitment to become a Mason and a member of the Tall Cedars of Lebanon to develop a deeper commitment to community service and his religious faith. Whenever possible he raised money for Special Olympics and the Make a Wish Foundation. Along with his wife, Joann, Tom leaves his daughter Lisa Jo Walker and her husband, Steven Walker of Spring Grove, his son Matthew and his wife Elizabeth of York; and 4 grandchildren Elizabeth Zifferer and her husband Graham of York, Andrew Walker of York, Madelyn Klinedinst of York, and Molly Klinedinst of York. He was preceded in death by his stepsister Nada Brenneman. A public viewing will be held from 12:00 to 1:00 pm on Saturday January 30, 2021, at First Church of the Brethren, 2710 Kingston Rd., York. The service will be private for the family, but will be live streamed at 1:00 pm at https://youtu.be/EJzr5u1orNs. Burial will be private in Salem Union Cemetery. All PA Department of Health COVID-19 guidelines will be followed for the viewing. Memorial contributions may be made to First Church of the Brethren, 2710 Kingston Road, York, PA 17402. Arrangements by the Etzweiler Funeral Homes and Cremation Service, 1111 East Market Street, York, PA 17403.

The family of Walter Thomas "Tom" Klinedinst Jr. created this Life Tributes page to make it easy to share your memories.

Send flowers to the Klinedinst family.