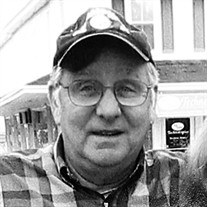 Walter Tyrone Frey Sr. passed away peacefully at his home on March 24, 2021. He was the son of Daisy R (Graham) Frey and John R Frey. He had 2 brothers, Terry and the late Palmer; and one half-sister Trudi (Metheny). Walter grew up in the town of Windsor where his father was a police officer. Walt made a living working for the state. He had many stories to tell of the mischief he would get in to on the job with his many coworkers who would become his life-long friends. He will forever be remembered for his goofy spirit and his lightheartedness. In his later years after retirement, Walt spent a lot of his time collecting things (which some might call “junk”), hauling metal to the scrap yard, and tinkering on lawn mowers. He was the local go-to guy when someone needed a part for their mower or just some good old-fashioned advice. Walt also spent many years helping his good buddy Charlie at his butcher shop. Walt is survived by his 9 children Cindy, Waltie, Sandy (Leiphart), Peggy (Baker), Dave, Joe, Laurie (Miller), Hope, and Matthew; 17 grandchildren; and 10 great grandchildren. Walt was preceded in death by his oldest son Junior, who passed away at birth and also a grandson Darwin. He also leaves behind his dear wife Kathi, whom he was married to for 45 years. Walt was a simple man who lived an even simpler life. He may not have had much but he was proud of what he had, and he was rich in his number of friendships and in the love his family had for him. If there’s one thing we can all be sure of, it’s that Walt is up there telling his stories to everyone in the heavens now, and we can only hope that one day we’ll be up there too, to hear his stories again. A grave site service will be open to the public, held on Monday March 29, 2021 at 1:00 pm at Mount Rose Cemetery, 1502 Mt. Rose Ave, York. Please meet at the Cemetery entrance at 12:45 pm. Monetary contributions can be made by contacting [email protected] Arrangements by the Etzweiler Funeral Homes and Cremation Service, 1111 East Market Street, York, PA 17403.

Walter Tyrone Frey Sr. passed away peacefully at his home on March 24, 2021. He was the son of Daisy R (Graham) Frey and John R Frey. He had 2 brothers, Terry and the late Palmer; and one half-sister Trudi (Metheny). Walter grew up in the town... View Obituary & Service Information

The family of Walter Tyrone Frey Sr. created this Life Tributes page to make it easy to share your memories.

Walter Tyrone Frey Sr. passed away peacefully at his home on...

Send flowers to the Frey family.