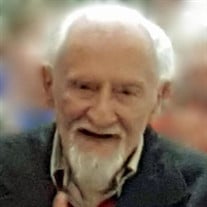 Walker Ball “Wally” Lamb, Jr., 97, died September 19, 2020 at SpiriTrust Lutheran Home, Shrewsbury. He was born December 19, 1922 in Millington (Kent Co.), MD to the late Walker Ball and Susie Elsie (VanZanc) Lamb. Wally started public elementary school September 1928 at 1-Room School, Morganee, MD and moved to Still Pond, MD in 1930 from which he graduated in June 1935. He entered Chestertown High School September 1935 and graduated in June 1939. Wally went 6 months to Bryant and Stratton Business School, Baltimore, MD from September 1939 to March 1940. Wally was first employed in April 1941 at the War Department in Washington, D.C. He was inducted into the Army Air Force in April 1943 and later became a parachute rigger in the 831st Bomb Squadron. In May 1944, he was sent to Italy and while in preparation for landing his ship was very close to another that was bombed and sunk by a German Messerschmitt. His ship was not hit but had severe rolling. Wally landed in Naples at the end of May and proceeded to his Base at Venosa, Italy. He left Italy in May 1945 and was honorably discharged in November 1945. Wally returned to the Department of the Army at the Pentagon in December 1945 and remained there until March of 1949. He entered Display School in late 1949 and graduated early in 1950. He was employed by Brager’s Department Store, Baltimore and later Stewarts Department Store, Baltimore until spring 1955 when he went to work for Mason and Dixon Trucking. Wally worked at several trucking companies including Roadway and retired from CTS, Baltimore. After retirement, he became interested in auctions and yard sales and moved to York, PA in February 1997 where he remained. He was always a music lover and collected sheet music and recordings. He joined the Baltimore Vintage Record Club in February 1980. Wally became a member of the Unitarian Universalist Congregation of York (UUCY) in 2005. Burial and graveside services will be held Monday, September 28, 2020 at 1:00 p.m. at Chester Cemetery, 310 High Street, Chestertown, MD 21620 with Rev. Terry Cummings of UUCY officiating. Military honors will be conducted at the cemetery. A memorial service will be held at a later date at UUCY, 925 S. George Street, York, PA. In lieu of flowers, memorial contributions may be made to UUCY, 925 S. George Street, York, PA 17403. Arrangements by the Etzweiler Funeral Homes and Cremation Service, 1111 E. Market St. York, PA 17403.

The family of Walker Ball "Wally" Lamb Jr. created this Life Tributes page to make it easy to share your memories.

Send flowers to the Lamb family.