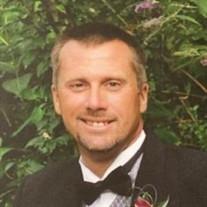 Troy Allen Krout, 56, of York died Thursday, November 5, 2020. He was the loving husband of Michelle (Wolfe) Krout of York. Troy and Michelle celebrated their 15th wedding anniversary on August 5, 2020. Born November 17, 1963 in York, he was the son of Keith and Elaine (Myers) Krout of Shiloh. Troy was the Lead Irrigation Technician for the Country Club of York agronomy team. He began working part time at the Country Club in 1982 while he was in college. Troy was currently the longest tenured employee of the Country Club. Troy graduated from West York High School in 1981 and York College of Pennsylvania in 1986. Troy was a member of the Prince Athletic Association, Hawk Gunning Club, and the Viking Athletic Association. Troy was an avid hunter and a member of Camp Hiawatha Hunting Camp in Potter County. He was looking forward to hunting with his son. He was a coach for the West York Boys Club Baseball team for many years. Troy helped with the Fletcher Racing Team and he enjoyed playing golf. Troy was a loving husband, father, son, and son-in-law. In addition to his wife, Michelle and his parents, Keith and Elaine Krout, he is survived by his 2 children, Dylan and Madison Krout of York; his mother-in-law, Peggy and her husband, Michael Vernon of Shiloh; and his extended family. A viewing will be held Wednesday, November 11, 2020 from 6:00-8:00 p.m. at the Etzweiler Funeral Homes and Cremation Service, 1111 E. Market Street, York. Private services for the family will be held Thursday, November 12, 2020 at the funeral home. The funeral service will be streamed to Troy’s tribute page on the funeral home website at www.etzweilerfuneralhome.com and will be available to be viewed following the service. Memorial contributions may be made to Michelle Krout, 2456 Beeler Avenue, York, PA 17408 to help with a college education fund for Dylan and Madison. Arrangements by the Etzweiler Funeral Homes and Cremation Service, 1111 East Market Street, York, PA 17403.

The family of Troy Allen Krout created this Life Tributes page to make it easy to share your memories.

Send flowers to the Krout family.