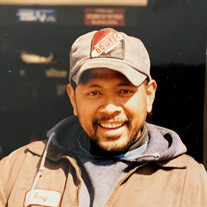 Tonny N. Palepale, 57, died on Sunday, February 13, 2022 at UPMC West Shore. He was the husband of Diane C. (Leight) Palepale, sharing 36 years of marriage. Tonny was born in Pago Pago, American Samoa on September 8, 1964, son of Nivaleti Palepale and the late Selepa (Amosa) Palepale. Tonny graduated from Waipahu High School in Waipahu, Hawaii. He dedicated over 20 years to Monumental Supply Company, Inc. Tonny was passionate about cars and enjoyed spending time in his garage. He loved playing paintball as well as riding four-wheelers and his motorcycle. To his core, Tonny was a family man. In addition to his wife and father, Tonny is survived by his son, Zachary R.N. Palepale; daughter, Rachel M. Palepale; six siblings, Fale, Esther, Mahina, Pate, Siapo, and Maurisi; and numerous nieces, nephews, great nieces, and great nephews. He was preceded in death by his brother, Manu. A funeral service will be held at 2:00 p.m. on Monday, February 21, 2022 at the Etzweiler Funeral Homes and Cremation Service, 1111 E. Market St., York. There will be a viewing on Monday from 1:00 to 2:00 p.m. at the funeral home. Burial will be private at the convenience of the family. Arrangements by the Etzweiler Funeral Homes and Cremation Service, 1111 E. Market St., York, PA 17403.

The family of Tonny N. Palepale created this Life Tributes page to make it easy to share your memories.

Send flowers to the Palepale family.