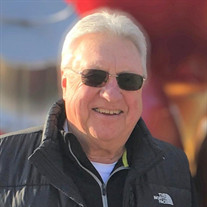 Thomas G. Henry, 72, of York passed away Friday, November 12, 2021. He was the beloved husband of Rita E. (Lehman) Henry. Tom and Rita celebrated their 52nd wedding anniversary on March 8, 2021. Born May 22, 1949 in York, he was son of the late Luella R. (Ruff) and Wilbur J. Henry, Jr. Tom was the owner of Wilbur Henry Plumbing and Heating, Inc., which has been family operated for over 65 years. Tom was a 1967 graduate of York Suburban High School and a 1971 graduate of York College of Pennsylvania. Tom was an avid golfer, bowler, hunter, and an epic story teller. He loved to laugh and joke and was always the life of the party. He enjoyed traveling and most importantly spending time with friends and family. He was the best husband, father, and pop pop who will be forever missed. In addition to his wife, Rita, Tom is survived by his daughter, Libby Kennell and her husband, Mike; daughter-in-law, Crystal Henry; 5 grandchildren, Seanna Henry, Gaige Henry, Chace Henry, Reed Kennell and Jake Kennell; and a brother, Frederick Henry and his wife, Joyce. Tom is preceded in death by his son, David G. Henry. A Celebration of Life Gathering will be held Thursday, December 16, 2021 from 12:00-2:00 p.m. in the Terrace Room of Heritage Hills Resort, 2700 Mount Rose Avenue, York. In lieu of flowers, memorial contributions may be made to Wounded Warrior Project, P.O. Box 758516, Topeka, KS 66675 or to a charity of your choice. Arrangements by the Etzweiler Funeral Homes and Cremation Service, 1111 E. Market St. York, PA 17403.

The family of Thomas G. Henry created this Life Tributes page to make it easy to share your memories.

Send flowers to the Henry family.