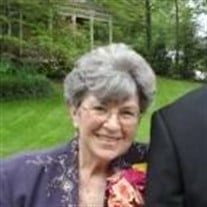 Thelma L. Aubel, 74, of Wrightsville, died peacefully on Friday, March 11, 2022, at the Masonic Village at Elizabethtown, after a courageous battle with Multiple Sclerosis. Born in Stuttgart, Germany on December 25, 1947, she was the daughter of the late Charles L. and Irena H. (Jakubowicz) Knaub. She was the loving wife of the late Jeffery A. Aubel. Thelma was a graduate of York Catholic High School. She went on to work as a machinist for Armstrong World Industries at the Lancaster Floor Plant, retiring after 19 years of service. At Armstrong, she was a member of the Union Local #928 IAM and was on the First Responder Safety Team. Thelma was a member of St. Peter Catholic Church, Columbia. She enjoyed playing bingo, volunteering for the United Way, and following her favorite driver, #3 Dale Earnhardt, in NASCAR. Above all, Thelma loved to spend time with her family and especially cherished the time spent with her beloved grandchildren Kyra Wise and India, Sophia, and Cooper Maldonado. In addition to her grandchildren, Thelma is survived by her children Robert K. “Bob” Aubel, and his wife Felicia of York, Jennifer L. Yohe, wife of the late Patrick Yohe of Columbia, and Laura A. Maldonado, and her husband Jose of York. She is also survived by her sister Elaine J. Schiffer, and her husband Byron of Lancaster, her brother-in-law Terry Aubel, and his wife Lynne of Peoria, AZ, and several nieces and nephews. A Mass of Christian Burial for Thelma will be held at 12:00 p.m. on Thursday, March 17, 2022 at St. Peter Catholic Church, 121 South 2nd Street, Columbia, PA 17512 with the Rev. Augustine Joseph, MSFS as Celebrant. Interment will follow in Susquehanna Memorial Gardens. There will be a viewing at the church on Thursday from 11:00 to 12:00 p.m. In lieu of flowers, contributions in Thelma’s memory may be made to the National Multiple Sclerosis Society at www.nationalmssociety.org. Arrangements by the Etzweiler Funeral Homes and Cremation Service, 700 Hellam Street, Wrightsville, PA 17368.

Thelma L. Aubel, 74, of Wrightsville, died peacefully on Friday, March 11, 2022, at the Masonic Village at Elizabethtown, after a courageous battle with Multiple Sclerosis. Born in Stuttgart, Germany on December 25, 1947, she was the daughter... View Obituary & Service Information

The family of Thelma L. Aubel created this Life Tributes page to make it easy to share your memories.

Send flowers to the Aubel family.