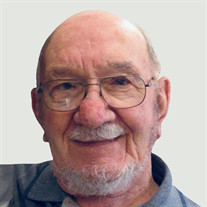 Sterling Lloyd Crone, husband of Audrey May Beaverson Crone, son of Lloyd M. Crone and Sadie Anderson Crone, and father of Kathy Eberly, Sandy Murphy, Sue Kucharik, and Marti Sanclemente died on December 25, 2020 at the age of 88. Sterling was preceded in death by his parents and his brother, Glenn Crone. He is survived by his wife, daughters, 12 grandchildren, 9 great-grandchildren, and his brother, Donald Crone. Born in Dover, PA, Sterling attended a one-room schoolhouse. He was the Dover Township 8th grade valedictorian and graduated from Dover High School in 1949. Sterling and Audrey met in 1951. They say a picture is worth 1000 words...After seeing Audrey’s high school graduation picture, Sterling drove to her house to ask her on a date. They loved each other through 68 years of marriage. During his life Sterling climbed many mountains. As a child he cared for his brother Glenn who suffered seizures. Then as a newly married man with two young children, he lost his hand in an industrial accident. While still in the hospital he figured out a way to go fishing during his recovery. At Lyon Metal, Sterling was given a job as a timekeeper and worked many over-time shifts to support his family. In 1961, Sterling and Audrey purchased a 100+ acre Christmas tree farm in Union County, PA, where he and some friends had previously built a small hunting cabin. He began farming Christmas trees part-time while continuing to work at Lyon Metal. Kasasuma Tree Farm provided people with the most beautiful hand-sheared Christmas trees in the world. For many years he was a member of the Pennsylvania Tree Growers Association. Sterling built the first family home on Druck Valley Road in York and, after living in Hartleton from 1973-1987, a log home on the tree farm. This avid outdoorsman shared his passion for hunting and fishing with his grandchildren, teaching his grandsons to hunt on the farm. Sterling went on several hunting adventures out West and on a few off-coast fishing trips, providing more material for captivating, detailed stories of his adventures. Throughout his life, Sterling volunteered for many organizations: Lions Club (He was a life-member of the Millmont West Union Area Lions Club and a member of the Shiloh Lions Club.), Union County West End Fair, and Christ’s United Lutheran Church to name a few. He was a member of Mt. Zion Evangelical Lutheran Church. Sterling was often called upon to speak to young people who lost limbs in farming accidents. He also served as the mayor of the Borough of Hartleton. As well as being a Christmas tree farmer and working for Lyon Metal Company, Sterling was an independent contractor for Cen-Pe-Co and Grainger. Sterling and Audrey sold the farm in 2012 and moved back to York County. They resided at The Village at Sprenkle Drive. Thank you to all of the wonderful caregivers in the Oaktree Memory Support Unit. Services will be held at a later date. Burial will be at Mt. Zion Cemetery. Memorial contributions can be made to: Mt. Zion Evangelical Lutheran Church, 2164 Mt. Zion Rd. York, PA 17406; Christ’s United Lutheran Church, 13765 Old Turnpike Rd. Millmont, PA 17845; or Lions Club International Foundation Dept. 4547 Carol Stream, IL 60122-4547. Arrangements by the Etzweiler Funeral Homes and Cremation Service, 1111 E. Market St., York, PA 17403.

The family of Sterling Lloyd Crone created this Life Tributes page to make it easy to share your memories.

Send flowers to the Crone family.