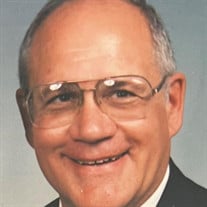 Stephen Bear Stock, 85, of York died January 14, 2022 at his residence. He is the husband of Debra M. (Flinchbaugh) Gross Stock. Steve and Deb were together for 30+ years. Born in York on October 1, 1936, he was the son of the late William B. Stock and Charlotte (Bear) Stock Weaver. Steve was a 1954 graduate of William Penn Senior High School, 1958 graduate of Gettysburg College, and 1959 graduate of New York University where he served as President of his class. Following school, he served as a Captain in the U.S. Airforce for 3 years and upon returning home to York was involved in the family owned Bear’s Department Store located in downtown York. He later retired from York Tent and Awning Company where he was the owner for 20+ years. Steve was active in the community, serving on numerous boards including York County Chamber Of Commerce, York Country Day School, Ski Roundtop, and Yorktowne Hotel. He was a member of the York Rotary Club for 50 years, a lifetime member of the York Fair, and a member of St. Matthew’s Lutheran Church. Some of his most memorable experiences included marching in the Macy’s Day Parade as a clown while attending NYU, playing Santa Claus at York YWCA events, and riding as Santa Claus in a fire engine in the York Halloween Parade. His favorite hobby was international travel, having traveled to 90+ countries. In addition he enjoyed painting, whittling, magic, and gardening. In addition to his wife, Deb, Steve is survived by his 2 sons, Gregory Stock and his wife, Connie of Houston, TX and Jeffrey Stock and his wife, Brooke of York; daughter, Jennifer Addison and her husband, Dustin of Hellam; 2 grandchildren, Landen and Caroline Stock; sister, Barbara S. Faiella of St. Petersburg, FL; 2 step sons, Cheyne Gross and his wife, Diane of Pittsburgh and Travis Gross and his wife, Whitney of Dallas, TX; and 5 step grandchildren, Tyler, Hunter, McKenna, Macy and Brinley Gross. Following cremation, a memorial service will be held Friday, January 21, 2022 at 3:00 p.m. at the Etzweiler Funeral Homes and Cremation Service, 1111 E. Market Street, York with Chaplain Mary Kay Alpaugh officiating. A visitation will be held Friday from 2:00-3:00 p.m. at the funeral home. A private burial will be held in Prospect Hill Cemetery. For those unable to attend, the service will be streamed on Steve’s tribute page on the funeral home website (www.etzweilerfuneralhome.com). In lieu of flowers, memorial contributions may be made to YWCA York, 320 East Market Street, York, PA 17403 or to Turning Point Counseling and Advocacy Center, 15 Wyntre Brooke Drive, York, PA 17403. Arrangements by the Etzweiler Funeral Homes and Cremation Service, 1111 E. Market St. York, PA 17403.

Stephen Bear Stock, 85, of York died January 14, 2022 at his residence. He is the husband of Debra M. (Flinchbaugh) Gross Stock. Steve and Deb were together for 30+ years. Born in York on October 1, 1936, he was the son of the late William... View Obituary & Service Information

The family of Stephen Bear Stock created this Life Tributes page to make it easy to share your memories.

Send flowers to the Stock family.