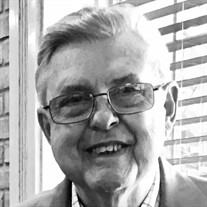 Stephen P. Nokes, 80, of Dover, died peacefully on February 28, 2022 at his home. Born in Wilmington, DE, on July 7, 1941, he grew up in Hagerstown, MD. He was the son of the late Harry E. and Maude Rebecca (Angevine) Nokes. He was predeceased by Karen J Nokes to whom he was married for 30 years. At the time of his death, Stephen, affectionately known as “Dah” by his family and many friends, was the husband of Maryll S. (Strickland) Nokes with whom he recently celebrated 23 years of marriage. Stephen is a veteran of the Viet Nam War having served with the US Army from 1964-66. Upon discharge, he resumed his career with Safeway Stores as a Produce Manager and was transferred to York, PA. He retired from Safeway after 30 years followed by 16 years with Kennie’s Market as Produce Supervisor. He was a member of the West York Rotary Club for 25 years and served as President from 2011-2012. After retirement he volunteered for several years as a driver for the Meals on Wheels Program through the Heritage Senior Center in Dover. In addition to his wife, he is survived by his daughter Nancy J. Kline of West York, two grandsons Evan A. and Kerek S. Nokes, a nephew David M. Nokes, and a niece Pamela J. Ott. He was preceded in death by his brother Michael E. Nokes. Visitation will be held will be held at Etzweiler Funeral Homes and Cremation Service, 1111 E. Market St., York, PA on Tuesday March 15, 2022 from 6:00 pm until 8:00 p.m. and Wednesday, March 16, 2022 from 10:00 a.m. with a Memorial Service immediately following at 11:00 a.m. Interment with Military Honors will take place at Rose Hill Cemetery in Hagerstown at a later date later date at the convenience of the family In lieu of flowers, contributions may be made to the American Kidney Fund at kidneyfund.org or the National Kidney Foundation at kidney.org Arrangements by the Etzweiler Funeral Homes and Cremation Service, 1111 East Market Street, York, PA 17403.

Stephen P. Nokes, 80, of Dover, died peacefully on February 28, 2022 at his home. Born in Wilmington, DE, on July 7, 1941, he grew up in Hagerstown, MD. He was the son of the late Harry E. and Maude Rebecca (Angevine) Nokes. He was predeceased... View Obituary & Service Information

The family of Stephen P. Nokes created this Life Tributes page to make it easy to share your memories.

Send flowers to the Nokes family.