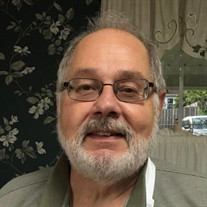 Stephen W. Busch, 70, of York, died peacefully at home on Friday, November 26, 2021. Born in York on May 3, 1951, he was the son of the late Frank C. and Ada (Gotwalt) Busch. He was the loving husband of Debra L. (Mikell) Busch. Steve served in the U.S. Coast Guard from 1969 - 1973. A graduate of William Penn Senior High School, he went on to attend York College and graduated with a Bachelor’s Degree and Masters of Business Administration. Steve’s entrepreneurial spirit led him to open Busch’s One Hour Photo Center, the first one hour photo business in York County. His work history included serving as Executive Director of the York City Human Relations Commission; Policy Analyst for South Central Workforce Development and the City of York Project Manager of White Rose Community Television, where he was a key participant in the development and creation of a new physical studio that would serve the community. Steve was passionately involved in bringing Little League Baseball to the children of the City of York and served as the Treasurer for several years. Steve was a Life Member of the York State Fair and enthusiastically served as the fair volunteer coordinator for several years before joining the volunteers in the Agricultural Education Center. Steve’s love for photography and creative spirit continued in retirement when he joined the York County Camera Club. Steve always had a camera in his hand and his family is blessed to have so many wonderful memories captured by him. His creative passion extended to cooking where he perfected his soup recipes that he always loved making for family and friends. But most of all, Steve adored and loved his high-school sweetheart, Debbie, celebrating their 52nd wedding anniversary on November 8th. In addition to his wife, Steve will be sadly missed by his children Michelle Busch, and her fiancé Felix R. Colon of York, Stephanie Holm, and her husband Michael of Mullica Hill, NJ, and David Busch, and his wife Julie Power of Pittsburgh, his brothers Frank L. Busch of York, Thomas Busch, and his wife Shirl of Lewisberry, and Monroe Busch, and his wife Margaret of Glen Rock. He was preceded in death by his sister, Jean Hammond. He is also survived by three grandchildren, Mason and Madelyn Holm and Dahlia Power, and 5 nieces and 1 nephew. A graveside service will be held at 1:30 p.m. on Friday, December 3, 2021 in Prospect Hill Cemetery, 700 North George Street, York. Please use the Pennsylvania Avenue entrance to the cemetery. There will be a viewing on Friday at the Etzweiler Funeral Homes and Cremation Service, 1111 East Market Street, York from 11:30 a.m. to 1:00 p.m., with a procession following to the graveside service. Those attending the viewing are requested by the family to wear masks. In lieu of flowers, contributions in Steve’s memory may be made to York City Little League, PO Box 1062, York, PA 17405. Arrangements by the Etzweiler Funeral Homes and Cremation Service, 1111 E. Market St., York, PA 17403.

The family of Stephen W. Busch created this Life Tributes page to make it easy to share your memories.

Send flowers to the Busch family.