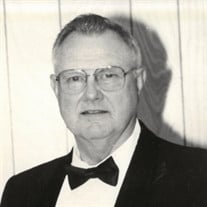 Samuel E. Stoner, Jr., 84, died on Tuesday, July 27, 2021 at Wellspan York Hospital. He was the husband of Barbara B. (Bair) Stoner, sharing 64 years of marriage. Samuel was born in Lancaster on July 21, 1937, son of the late Samuel E. Stoner, Sr. and Mildred K. (Kline) Stoner. Samuel was a supervisor at DeWalt and then retired from County Line Quarry in 2002. He was a member of Wrightsville Hope United Methodist Church, Riverside Lodge 503 F&AM, Lancaster Liederkranz, and Tall Cedars of Lebanon. Samuel enjoyed to travel. His wife, family and belief in God were everything to him. In addition to his wife, he is survived by four children, William J. Stoner and his wife, Sharon L. of Wrightsville, LuAnn L. Goldfarb and her husband, Brian G. of Rehoboth, DE, Jeffrey D. Stoner and his wife, Melony S. of Wrightsville, and Daniel R. Stoner and his wife, Elizabeth Ann of Cly; six grandchildren; two great grandchildren; two great great grandchildren; and his sister, Sandra J. Wright. He was preceded in death by his brother, William G. Stoner; and his brother in law, Jere Wright. A funeral service will be held Monday, August 2, 2021 at 11:00 a.m. at Wrightsville Hope United Methodist Church, 404 Hellam Street, Wrightsville, with Pastor Jerry Schmidt officiating. A viewing will be held on Monday from 10:00 to 10:45 a.m. at the church with a masonic service presented by his lodge beginning at 10:45 a.m. Burial will follow the service in Laurel Hill Memorial Gardens. In lieu of flowers, memorial contributions may be made to Wrightsville Hope United Methodist Church, 404 Hellam Street, Wrightsville, PA 17368. Arrangements by the Etzweiler Funeral Homes and Cremation Service, 700 Hellam Street, Wrightsville, PA 17368.

The family of Samuel E. Stoner Jr created this Life Tributes page to make it easy to share your memories.

Send flowers to the Stoner family.