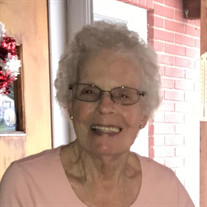 Ruthetta V. “Rosie” Fogle, 89, of York, died peacefully on Thursday, October 14, 2021. Born in Dover on May 13, 1932, she was the daughter of the late Floyd G. and Ruth R. (Dick) Rauhauser. Ruthetta was the loving wife of the late Dale E. Fogle who preceded her in death on January 4, 2017. Ruthetta was a 1950 graduate of East Berlin High School. She was the office manager for 36 years for the York Coca-Cola Bottling Company. After her retirement from Coca-Cola, she attended York Vo-Tech in the Medical Assistant program, which led to her serving as a caregiver to many in the area. Ruthetta was a very active member of St. John Lutheran Church. She attended church Bible classes and was a Sunday School teacher for 30 years. She was also on the Altar Guild at St. John and will be remembered by those in the church as a greeter, always welcoming everyone to Sunday services with a smile. Ruthetta is survived by her children Debra F. Horlebein and her husband, Steve of Spanish Fort, AL, Sandra R. Hetrick and her husband, Ronald of Enola, and David E. Fogle and his wife, Nancy Ann Rossi of York. She is also survived by her sister, Annis Diehl and her husband, Gene of York; her grandchildren, Melanie Bunting-Seymour and her husband, Jon, Shonna Horlebein, Braden Hetrick and his wife, Stacie, Dillon Hetrick, Blaze Fogle and Brock Fogle; her great-grandchildren, Lola Stiell and Silas Hetrick; and many nieces, nephews, and friends. She was preceded in death by her brother, Clair Rauhauser and her infant sister, Dorothy Rauhauser. A funeral service will be Thursday, October 21, 2021 at 11:00 a.m. at St John Lutheran Church, 2580 Mount Rose Avenue, York, with Pastor Tab Cosgrove officiating. Interment will follow in Mount Zion Cemetery. There will be a viewing at the church on Thursday from 10:00 to 11:00 a.m. In lieu of flowers, contributions in Ruthetta’s memory may be made to St. John Lutheran Church, 2580 Mount Rose Avenue, York, PA 17402. Arrangements by the Etzweiler Funeral Homes and Cremation Service, 1111 E. Market St., York, PA 17403

The family of Ruthetta V. "Rosie" Fogle created this Life Tributes page to make it easy to share your memories.

Send flowers to the Fogle family.