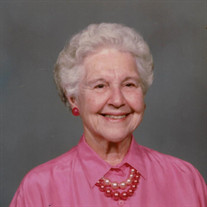 Ruth M. Schrom died peacefully on Wednesday, January 26, 2022 at her home in Wenger House at the Virginia Mennonite Retirement Community in Harrisonburg, VA after an incredible 104 year run of life. Ruth (or Ruthie, as she was often called... View Obituary & Service Information

The family of Ruth M. Schrom created this Life Tributes page to make it easy to share your memories.

Send flowers to the Schrom family.