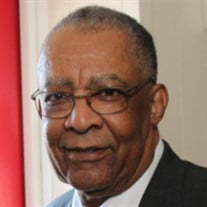 Russell Dorm III passed away peacefully on Friday, June 18, 2021 at his residence. Russell "Rubby" born March 21, 1943 in York PA where he became a much respected pillar of the community. Being the first son of the late Russell Jr. and Frazil (Keenheel) Dorm. His sister Catherine Joyce Daniel, brother Dwight "Dan" Dorm, nephew Eric Dorm and granddaughter Sage Duncan preceded him in death. Leaving a sole survivor in brother Herb Dorm of Douglasville, GA. A graduate of William Penn Senior High School where he excelled in a host of sports. Returning again to become Head Coach of the Volleyball programs. Spending his early employment years as a top Sewing Machine Mechanic in numerous businesses around the county before eventually starting his own company. Contributing to the apparel wear industry by co-designing the "Dorm Suit" aka Bennet 34 which makers such as Under Armor used as inspiration for the undergarments worn by professional athletes today. As well as, a neoprene vest for pets where the leash is attached to the back of the torso instead of the neck. Embracing a career move later in life by accepting the position of City of York Health Inspector. Educating and reinforcing safety in the many homes and restaurants within its jurisdiction. Creating awareness for others with compassion; yet unafraid of becoming firm with any business that did not comply to the requested adjustments. He loved to cook; tending to share his culinary creations with family and friends. A hobbyist in many things including ceramic castings which he'd hand paint. Known to name those commissioned master works of art before giving away to those he cared about. The room would be filled with many figurines destined to go somewhere each depicting a personal trait he seen in the individual. Russell was a great mechanical issues troubleshooter able to repair almost anything. He is known to many as a Coach, Referee, Inspector or Commissioner. Russell is survived by his wife of more than thirty years Carol (Stiffler) Dorm. As well as a blended family of children consisting of sons Dominic Russell Dorm, Christopher Wayne Dorm, Ashley Duncan, daughters Aleta Marie Dorm, Samantha Lynn Dorm, Sheila Mentzer and Tiffany Duncan, as well as their respective spouses who were made to feel as one of his own. There are 18 grandchildren, and 6 great grandchildren. Russell participated in a host of sports including Bowling, Tennis, Track and Volleyball. Implementing many leagues and camps for kids. Created and/or coordinated Recreational Volleyball programs indoors at Salvation Army, Voni Grimes Gym, vastly competitive tournaments at the Keystone State Games, Kingfisher Volleyball Open and Hoffman Sand Volleyball Courts at Memorial Park which has now been rededicated and named Russell Dorm III Volleyball Courts. His competitive nature transcended to leisure sport levels such as Miniature Golf, Online Billiards, and Fishing. Studying the range, angle-shots and knowing sweet spots in the waters for greatest success. You would think, seeing this mild mannered couple (Russ and Carol) carrying their own clubs onto the Putt Putt Course as clue enough for any invited players. The "fix" was in and you were about to get your bum royally handled. Still, he would not let you leave without giving some advice to make you better. "Swing left of the Windmill, avoiding the bunker on the right, the ball will break slightly right then roll to the left. Clear out any leaves along the path before the shot and you should make it in five strokes." He was that good, but Carol was even better and gleeful to let him and others know it. "Game, set, match," his time with us has come to an end. May his memory serve as an enduring spirit that brings all closer. Memorial services to be held at Etzweiller Funeral Home 1111 E. Market St., York Thursday, June 24. With an open to public viewing from 5pm to 7pm. Pastor Adrian Boxley will officiate a private service for the family after 7pm. Masks and social distancing practices are required. Rubby will be laid to rest at Susquehanna Memorial Gardens. Arrangements by the Etzweiler Funeral Homes and Cremation Service, 1111 E. Market St. York, PA 17403.

Russell Dorm III passed away peacefully on Friday, June 18, 2021 at his residence. Russell "Rubby" born March 21, 1943 in York PA where he became a much respected pillar of the community. Being the first son of the late Russell Jr. and... View Obituary & Service Information

The family of Russell Dorm III created this Life Tributes page to make it easy to share your memories.

Send flowers to the Dorm family.