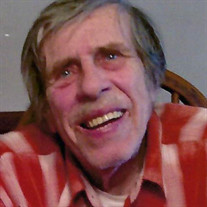 Romanus R. “Maz” Myers, Jr., 83, of York died June 2, 2021 at Manor Care Health Services-North. He was the husband of the late Gloria M. (Heidlebaugh) Myers. They were married for 61 years prior to her death in 2019. Born October 23, 1937 in York, he was the son of the late Grace Matilda (Mitzel) and Romanus R. Myers, Sr. Maz was a veteran of the US Air Force. Maz worked for Borg Warner in Production Control and for Cole Steel as a Production Control Analysis. He also was a custodian for the York City School District and worked part time for the Koller Funeral Home. Maz graduated in 1955 from William Penn Senior High School. He was a member of Springwood Chapel. Maz was previously a very active member of Trinity Lutheran Church in York where he coached in the Sunday School Basketball League. He is survived by his daughter, Rose Goodling of York; 3 grandchildren, Romanus “Ross” Myers, IV and his companion, Chawna, Chad Goodling and his wife, Jennifer, and Shelly Goodling and her companion, Jeremiah; 3 great grandchildren, Romanus “Manny” Myers, V, Korie Myers, and Finley “Finn” Goodling; and a brother, Joseph Myers and his wife, Linda of Eugene, OR. He was preceded in death by a son, Romanus “Randy” Myers, III, daughter-in-law, Kelly Myers, and sister, Ruth Romaine Ross. Following cremation, a memorial service will be held Saturday, June 19, 2021 at 11:00 a.m. at Springwood Chapel, 2360 Springwood Road, York with Pastor Edward J. Ross, III officiating. In lieu of flowers, memorial contributions may be made to Springwood Chapel, 2360 Springwood Road, York, PA 17402 or to the SPCA of York County, 3159 Susquehanna Trail North, York, PA 17406. Arrangements by the Etzweiler-Koller Funeral Home and Cremation Service, 2000 W. Market St. York, PA 17404.

The family of Romanus R. "Maz" Myers Jr. created this Life Tributes page to make it easy to share your memories.

Send flowers to the Myers family.