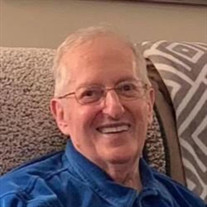 Rev. Rodney I. Richesson, 83, of Windsor died June 10, 2022 at his home. He was the husband of the late S. LaFawn (Austin) Richesson. Born June 13, 1938 in Mercersburg, Pa, he was the son of the late Kenneth Irvin and Maxine Louella (McAfee) Richesson. Rev. Richesson was a veteran of the U.S. Navy and served from 1956-1960 on the USS Newport News. Rodney was a 1956 graduate from James Buchanan High School in Mercersburg, a 1970 graduate of Shippensburg University, and a 1973 graduate of Wesley Theological Seminary in Washington, DC. Rev. Richesson entered the ministry on August 1, 1966. In 1971, he became a Deacon and in 1974 he was ordained as an Elder. During his ministry, Rev. Richesson served many churches. They include the Doylesburg United Methodist Charge (Blain, New Germantown, Concord and Doylesburg) from 1966-1971; the Rouzerville Charge (Ortanna, Wesley Chapel Fountaindale, and Rouzerville) from 1971-1974; the Yorkana Charge (Christ United Methodist and Mt. Pisgah United Methodist) from 1974-1988; Fishburn United Methodist in Hershey from 1988-1995; and Bethany United Methodist Church in Dover from 1995-2003. Rev. Richesson retired from Bethany in 2003. After retirement, he was an Associate Pastor at Yorkshire United Methodist Church in York. He was a member of the Susquehanna Conference of the United Methodist Church. Rev. Richesson is survived by his 3 children: daughter Camilla Sue and her wife, Nancy; daughter Renee Michelle; and son Douglas Andrew and his wife, Brenda. He is also survived by 3 grandchildren: Ian Kenneth, Charlotte Rose, and Sean Andrew. He was preceded in death by his brother, Larry Leroy Richesson. Funeral services will be held Wednesday, June 22, 2022 at 1:00 p.m. at Yorkshire Church, 125 Edgewood Road, York, PA 17402 with Pastor Dave Kominsky as the officiant assisted by the Rev. Dennis A. Hummel and the Rev. Paul F. Crawford. Burial will be in Machpelah Cemetery. A viewing will be held Wednesday from 11:00 a.m. to 1:00 p.m. In lieu of flowers, memorial contributions may be made to American Cancer Society, PO Box 30386, Philadelphia, PA 19103 or to the American Heart Association, PO Box 840692, Dallas, TX 75284-0692. Arrangements by the Etzweiler Funeral Homes and Cremation Service, 1111 E. Market St. York, PA 17403

Rev. Rodney I. Richesson, 83, of Windsor died June 10, 2022 at his home. He was the husband of the late S. LaFawn (Austin) Richesson. Born June 13, 1938 in Mercersburg, Pa, he was the son of the late Kenneth Irvin and Maxine Louella (McAfee)... View Obituary & Service Information

The family of Rev. Rodney I. Richesson created this Life Tributes page to make it easy to share your memories.

Send flowers to the Richesson family.