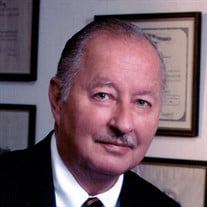 Robert Joseph Stewart, age 90, passed away on Wednesday, February 10, 2021. Bob was born on December 23, 1930 in Nashville, Tennessee. He was predeceased by his parents, Eleanor Hood Stewart and William Richard Carl Stewart, his brother W. Richard C. Stewart II, and his wife Norma Heaps Stewart. Bob grew up in Nashville, graduating from Hillsboro High School in 1949. He studied at the Illinois Institute of Technology and graduated from the Wharton School at the University of Pennsylvania in 1953. He served as an officer in the United States Marine Corps for two years before attending and graduating from the University of Michigan Law School in 1958. He met his wife, Norma, while she was studying at the University of Pennsylvania School of Nursing. They were married on February 15, 1954 at Holy Trinity Lutheran Church in Hershey. After Bob graduated from law school in Ann Arbor, he and Norma moved to the York area in 1958 where began his fifty-plus year career as a lawyer. He practiced with several firms in York. His longest tenure was with Liverant, Senft and Cohen, which merged with Barley Snyder in 1991. Bob’s specialty was representing insurance companies. He was deeply honored when elected to the American College of Trial Lawyers in 1978. He served on the Board of Directors of the York County Bar Association and was a member of it, the Pennsylvania Bar Association and the American Bar Association for over fifty years. He was also President of the Pennsylvania Defense Institute. In addition, Bob was a very active member of First Presbyterian Church of York, serving as Chair of the Board of Trustees, and as an Elder and Clerk of Session. He was instrumental in, and proud of, his role in establishing the Memorial Garden at the church. Other community organizations in which he was involved included serving as Vice President of the United Way Board, Vice Chairman of the York Housing Authority, a member of the York Township Planning Commission, and on the York Community Progress Council. He served the youth of York for many years through the Aquatic Club of the York YMCA. His roles included being club President and Vice President, as well as Chair of the Officials Committee. He was a devoted husband, loving father and proud grandfather. He is survived by his daughter and son-in-law, Eleanor Stewart Resser and Bill Resser of Mechanicsburg; his daughter, Judy Stewart of Santa Barbara, Calif.; his son, Andy Stewart and his wife Judy Cusma Stewart of York; his brother-in-law, Dr. Kenneth Heaps of Red Lion; his sister-in-law Eileen Heaps of Palmyra; his nine grandchildren, Megan Resser Cash, Jenna Resser Mercatili, Chris Greenberg, Hannah Greenberg Hussain, Eleanor Greenberg, Sada Stewart, Tessa Stewart, Noah Stewart and Coleman Stewart; his two great-grandchildren Dexter and Nora Mercatili; along with several nieces, nephews and cousins. Bob and Norma enjoyed traveling with family and friends, especially to Williamsburg, the Outer Banks and Jamaica where Bob fully embraced his love of the ocean. He was a devoted father, making many early morning trips to horse shows in support of his daughters’ horseback riding careers. He also spent countless hours officiating at swimming meets in support of his son’s competitive swimming. Bob, or “Grandad”, was very supportive of his grandchildren’s interests and one of his greatest sources of joy was seeing the family together during vacations at the beach. The family would like to express their gratitude to the caregivers of ComForCare Home Care, and in particular Joy Gwyn, his main caregiver for the last three years, for dedicated and compassionate care. A private service for the family is planned for the interment of his ashes at the Memorial Garden at First Presbyterian Church. The family respectfully requests that for anyone interested in honoring Bob’s life, donations be made to First Presbyterian Church of York, https://www.fpcyork.org, 225 East Market St., York, PA, 17403. Arrangements by the Etzweiler Funeral Homes and Cremation Service, 1111 E. Market St., York, PA 17403.

The family of Robert Joseph Stewart created this Life Tributes page to make it easy to share your memories.

Send flowers to the Stewart family.