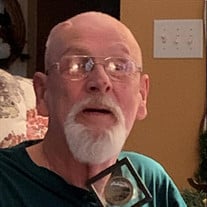 Robert E. “Bob” Small, 79, of York, died peacefully, or as he would tell, “made it to Heaven a ½ hour before the devil knew I was dead”, on Wednesday, December 15, 2021. Born in York on October 6, 1942, he was the son of the late Robert Walter and Mary M. (Frey) Small. Bob was the loving husband of the late Barbara A. (Rohrbaugh) Small who preceded him in death in 2018. Bob was a 1961 graduate of William Penn High School. He was a US Army Veteran of the Vietnam War. He began his working career as a welder for Allis-Chalmers, later Voith Hydro, and retired after more than 40 years of service. He was a member of St. John Lutheran Church. Bob enjoyed hunting and target shooting. He liked to spend time with his dogs and always enjoyed a good meal. His favorite past time though, was taking a nap or as Bob said, “watching TV”. Bob is survived by his children, Stephanie A. Warner with whom he lived, Steven J. Warner and his wife Jayne of Seven Valleys, Mindi Sue Small of Gettysburg, and Jeffrey Michael Small of Georgia. He is also survived by his grandchildren, Steven, Jessica, Stefany, Antwaan, Allyson, Kyle, Cheynne, and Trystan and his great-grandchildren, Wesley and Harper. A funeral service will be held at 1:30pm on Monday, December 20, 2021 at 1:30 p.m. at the Etzweiler Funeral Homes and Cremation Service, 1111 East Market Street, York. Interment will follow in Prospect Hill Cemetery. There will be a viewing at the funeral home on Monday from 12:30 to 1:30 p.m. In lieu of flowers, contributions in Bob’s memory may be made to Wounded Warrior Project at www.woundedwarriorproject.org. Arrangements by the Etzweiler Funeral Homes and Cremation Service, 1111 E. Market St. York, PA 17403.

The family of Robert E. "Bob" Small created this Life Tributes page to make it easy to share your memories.

Send flowers to the Small family.