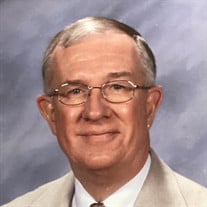 Mount Wolf-Thursday, January 20, 2022-With thanksgiving to the Almighty God, Dr. Rev. Robert Kitchen comes before our God of grace, seeking abundance of the Latter through the death and resurrection of our Lord Jesus Christ. Robert was married to Nancy Boyer of Lehighton for 59 years. Robert and Nancy were blessed with a daughter Cynthia “Cindy” Kitchen. Pastor Kitchen was the son of John and Kathryn (Symons) Kitchen of Stroudsburg, PA. Throughout the years the family lived in the following towns and cities where Pastor Kitchen served as a parish pastor, Hollidaysburg, Lancaster, Jacobus, Lewisburg, Easton, and Lock Haven. During the years of 1984-1987, he was affiliated with the Network of Christian Counselors in St. Petersburg, FL. After retirement, Pastor served temporarily as an interim minister and crisis minister at St. Petersburg, Mechanicsburg, St. John’s Abbottstown, and the Freysville/Canadochly Parishes. While living in Lewisburg and Mechanicsburg he was also greatly involved in prison ministry. In 2010 Pastor Kitchen was present for the formation of the new “North American Lutheran Church” (NALC) which has now grown to more than 400 churches. Pastor Kitchen received many degrees and accomplishments throughout his career. He graduated from Muhlenberg College, Gettysburg Lutheran Seminary, finally receiving his Doctorate from Eastern Baptist Seminary in Philadelphia. Funeral services will be held at 1:00 p.m. on Friday, January 28, 2022, at Reformation Lutheran Church, 2100 Manor Ridge Road, Lancaster, PA 17603 with Rev. Steven Shipman and Deacon Arica Demme officiating. Interment will follow in Salem Union Cemetery, Jacobus. There will be a viewing for Pastor Kitchen on Thursday, January 27, 2022, at the Etzweiler Funeral Home, 1111 East Market Street, York from 4:00 to 6:00 p.m. and again of Friday at the church from 12:00 to 1:00 p.m. The family asks that those attending the viewing and services to please wear facemasks. In lieu of flowers, contributions in Pastor Kitchen’s memory may be made to Reformation Lutheran Church, 2100 Manor Ridge Road, Lancaster, PA 17603. Arrangements by the Etzweiler Funeral Homes and Cremation Service, 1111 East Market Street, York, PA 17403.

Mount Wolf-Thursday, January 20, 2022-With thanksgiving to the Almighty God, Dr. Rev. Robert Kitchen comes before our God of grace, seeking abundance of the Latter through the death and resurrection of our Lord Jesus Christ. Robert was married... View Obituary & Service Information

The family of Dr. Rev. Robert Kitchen created this Life Tributes page to make it easy to share your memories.

Send flowers to the Kitchen family.