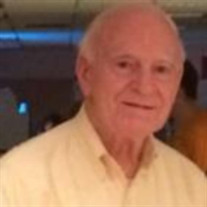 Robert E. Keyser, age 91, of Carlisle, formerly of Dauphin, died peacefully on Monday, December 20, 2021, at ManorCare Health Services-Carlisle. Born in Williamsport, he was the son of the late Samuel and Margaret (Evans) Keyser. He was the loving husband of the late Jean Elizabeth (Hershey) Keyser who preceded him in death in 2014, and his brother, Linn W. Keyser of Montoursville. Robert (Bob) was born and raised in Williamsport. He was a US Army Veteran. Following his military service, he worked as a construction manager for the Pennsylvania General Authority. Bob loved all things trains and rail road, anything electrical, taking care of his property, delicious food and ice cream, but mostly his dear wife Jean. They enjoyed traveling to Maine with friends twice a year for many years. He was a member of the Methodist Church. Robert was a 32nd degree Mason, a member of the Harrisburg Consistory and was also a Knight Templar. He was a lifelong Model Rail Roader and loved working on his Susquehanna O scale railroad at his home. At different times in his life he held memberships at the Reading, Lancaster, York and Elizabethtown Model Railroad Clubs. He was a participant of the model train display at the Masonic Village in Elizabethtown. Robert is survived by his nieces Shelly Callaway, Shirlyn Gray, Kristen Hall, Deborah Hamilton, Elizabeth Holliday, Shari Keyser-Groff, Cathy Smith, Karen Sykes and nephews Fred Kauffman, Edward Keyser, and Eric Keyser. A graveside service for Robert will be held at 2:00 p.m. on January 4, 2022 in Prospect Hill Cemetery, 700 North George Street, York. A memorial service to celebrate Robert’s life will be announced later. Arrangements by the Etzweiler Funeral Homes and Cremation Service, 1111 East Market Street, York, PA 17403.

Robert E. Keyser, age 91, of Carlisle, formerly of Dauphin, died peacefully on Monday, December 20, 2021, at ManorCare Health Services-Carlisle. Born in Williamsport, he was the son of the late Samuel and Margaret (Evans) Keyser. He was the... View Obituary & Service Information

The family of Robert E. Keyser created this Life Tributes page to make it easy to share your memories.

Send flowers to the Keyser family.