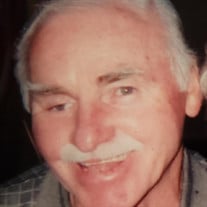 Robert Gracey, Jr., 85, of Dover, died peacefully at home on Friday, November 27, 2020. Born in York on May 9, 1935, he was the son of the late Robert Gracey, Sr. and the late Helen (Lawyer) Gracey, and the step-son of the late Irene Gracey. Bob was the loving husband of 68 years to Shirley T. (Dunklebarger) Gracey. Bob was a US Army Veteran of the Korean War. Following his time in the service, Bob went to welding school. He became a welder at Harley-Davidson for many years and also owned and operated his own welding shop. Following his career as a welder, Bob became a janitor for the West Shore School District. Bob was a member of Lighthouse Baptist Church in Dover. He was also a member of the American Legion in Shiloh. Bob enjoyed golfing and hunting in his earlier years. His main hobby though, was going fishing in the bays of Maryland, and he especially cherished the fishing trips with his sons. Above all, Bob loved to spend time with his family, especially with his 10 grandchildren and 14 great-grandchildren. In addition to his wife and grandchildren, Bob is survived by his daughter, Tina M. Green and her husband, William; his son, Robert E. Gracey and his wife, Una; and his half-brothers and sisters, Anna Moody, Melvin Gracey, Sandra “Darlene” Danner, Linda Hotz, Elizabeth Anderson, and Carmen Gracey. Bob was preceded in death by his son, Frank E. Gracey; his daughter, Kimberly A. (Gracey) Young; his half-brother, Eddie Gracey; and his half-sister, Louise Gracey. Friends and relatives are invited to attend a viewing for Bob on Wednesday, December 2, 2020 from 10:00 to 11:00 a.m. at the Etzweiler Funeral Homes and Cremation Service, 1111 East Market Street, York. A private family service will follow the viewing with interment in Mount Rose Cemetery. In lieu of flowers, contributions in Bob’s memory may be made to the American Cancer Society, 314 Good Drive, Lancaster, PA 17603. Arrangements by the Etzweiler Funeral Homes and Cremation Service, 1111 E. Market St., York, PA 17403.

Robert Gracey, Jr., 85, of Dover, died peacefully at home on Friday, November 27, 2020. Born in York on May 9, 1935, he was the son of the late Robert Gracey, Sr. and the late Helen (Lawyer) Gracey, and the step-son of the late Irene Gracey.... View Obituary & Service Information

The family of Robert Gracey Jr. created this Life Tributes page to make it easy to share your memories.

Send flowers to the Gracey family.