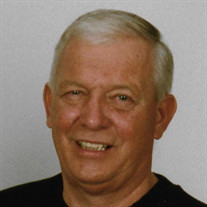 Robert A. “Bob” Bedell, 77, died on Sunday, August 29, 2021 at his residence. He was the husband of Barbara “Bonnie” (Black) Bedell, sharing 54 years of marriage. Bob was born in Oceanside, NY on November 8, 1943, son of the late Malcolm A. and Elizabeth T. (Stevens) Bedell. Bob was a proud veteran of the United States Coast Guard. He was a Project Manager at Citibank and retired from the company after 38 years. Bob was active in the various Episcopal churches he attended in different parts of the country throughout his life, including teaching Sunday School with a thick New York accent to eager fourth graders in South Dakota. Bob was an avid reader and took special delight in learning about many aspects of American and world history. He enjoyed watching baseball on TV and in the ballpark, transferring a boyhood love of the Brooklyn Dodgers into being a fan of the New York Mets and later the Baltimore Orioles. He was a golfer and a fisherman, taking pleasure in regular trips to Canada to camp with friends. In addition to his wife, he is survived by four children, Tracy Bedell-Hoke of York, Russell Bedell of York, Kimberly Sutton and her husband, Geoffrey of Waynesboro, and Amanda Bedell of Waynesboro; and seven grandchildren, Elizabeth, Nicholas, Emilyn, Andrew, Dashiell, Madeleine, and Xavier. He was preceded in death by his brother, Franklin Bedell, and his sister, Linda Rice. A funeral service will be held at 2:00 p.m. on Thursday, September 2, 2021 at the Etzweiler Funeral Homes and Cremation Service, 1111 E. Market St., York. A viewing will be held on Thursday from 1:00 to 2:00 p.m. at the funeral home. Burial will be private at the convenience of the family. Memorial contributions may be made to the Grantley Fire and Ambulance Company, 918 Virginia Ave, York, PA 17403. Arrangements by the Etzweiler Funeral Homes and Cremation Service, 1111 E. Market St., York, PA 17403.

The family of Robert "Bob" A. Bedell created this Life Tributes page to make it easy to share your memories.

Send flowers to the Bedell family.