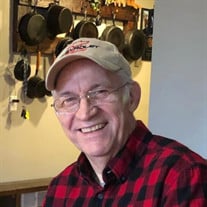 Robert Conrad Bloom, Jr., 72, of Spring Grove died January 22, 2021 at UPMC-Hanover. He was the husband of Roseanna (Coxen) Bloom. Robert and Roseanna would have celebrated their 51st wedding anniversary on January 24, 2021. Born January 16, 1949 in Fallen Timber, PA, he was the son of the late Robert Conrad and Irene Cynthia (Edminston) Bloom. Robert was a crane operator for General Dynamics. He was a 1968 graduate of Susquehannock High School. He was a member of Harvest Chapel in Abbottstown. Robert enjoyed hunting, fishing, trapping, and making muzzleloader guns. Robert was an incredible husband, dad, and grandfather. In addition to his wife, Roseanna, he is survived by his 2 sons, Robert Bloom, III and his wife, Erin of Dallastown and Joshua Bloom and his wife, Hilary of Hanover; 2 daughters, Carrie Houston and her husband, Matthew of Hanover and Jody Smith and her husband, Christopher of Spring Grove; 10 grandchildren, Faith Quirino, Josh Jr., Josiah, Ezekiel, Zebadiah, and Bella Bloom, Kyra Smith, Connor Houston, and Zachary and Hailee Bloom; and 2 sister, Velma Kreisel and Tammy Hutton. He was preceded in death by his son, Matthew Bloom and his grandson, Joseph Bloom. Funeral services will be held Wednesday, January 27, 2021 at 10:00 a.m. at Harvest Chapel, 6947 York Road, Abbottstown, PA 17301 with Pastor Donald Wolabaugh and Pastor Tim Overmiller officiating. Burial will be in Salem Union Cemetery, Dover. Viewings will be held Tuesday, January 26, 2021 from 5:00-8:00 p.m. and Wednesday from 9:00-10:00 a.m. both at Harvest Chapel. The funeral service will be available to be viewed following the funeral service on Robert’s tribute page at www.etzweilerfuneralhome.com. In lieu of flowers, memorial contributions may be made to Harvest Chapel, 6947 York Road, Abbottstown, PA 17301. Arrangements by the Etzweiler-Koller Funeral Home and Cremation Service, 2000 W. Market St., York, PA 17404.

The family of Robert Conrad Bloom Jr. created this Life Tributes page to make it easy to share your memories.

Send flowers to the Bloom family.