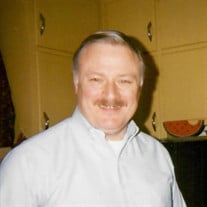 Richard Chester ‘Dick’ Wojewodzki, 78, of Gettysburg, died peacefully at the York Hospital on Friday, August 20, 2021. Born in Jersey City, NJ on January 15, 1943, he was the son of the late Chester and Mary Wojewodzki. Dick was the loving husband of Shirley L. (Snell) Ropiza Wojewodzki, they were married January 25, 2002. Dick was a graduate of the former Pennsylvania Military College. He went on to become a Captain in the US Army. Following his time in the military, Dick went to work in the freight transportation industry. He loved his job as a terminal manager for Consolidated Freight, serving CF for over 30 years. He was a member of the Hawk Gunning Club and Grace Evangelical Lutheran Church, York. Dick enjoyed collecting coins and model trains, and watching television in his free time, especially classic shows, westerns, and anything staring John Wayne. In addition to his wife, Dick is survived by his daughters, Susan Barker and her husband David and Lauren Doby and her husband Jodi, his 5 grandchildren, his step-son David Ropiza, his step-daughter Valarie Ropiza Kenworthy, and his 3 step-great-grandchildren. He was preceded in death by his beloved step-granddaughter Jennifer L. Miller. A funeral service will be held Thursday, August 26, 2021 at 11:00 a.m. at the Etzweiler Funeral Homes and Cremation Service, 1111 East Market Street, York. Interment will follow in Mount Rose Cemetery. There will be a viewing at the funeral home on Thursday from 10:00 to 11:00 a.m. In lieu of flowers, contributions in Dick’s memory may be made to the American Stroke Association at www.stroke.org. Arrangements by the Etzweiler Funeral Homes and Cremation Service, 1111 E. Market St. York, PA 17403

The family of Richard Chester "Dick" Wojewodzki created this Life Tributes page to make it easy to share your memories.

Send flowers to the Wojewodzki family.