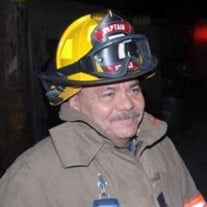 Richard W. Stahle, Sr., 62 of York, PA, died at York Hospital on August 31, 2020. He was the husband of Sharon (Trimmer) Stahle with whom he observed their 39th wedding anniversary on August 7, 2020. Born July 31, 1958 in Fort Knox, KY, he was the son of the late Wayne R. and Naomi (Tabei) Stahle. Richard was a veteran of the U.S. Army and was employed as a printer for Strine Printing. He served as a volunteer fireman for the City of York since 1976, where he also served as a Captain. He was a lifetime member of the Eagle Fire Co., Rex Fire Co., Laurel Fire Co. and the Vigilant Social Club. He was a member of the Foreman’s, President’s and Fire Chief’s Association and the York Volunteer Fireman’s Relief Association. Richard was a member of the York County Hazmat Team Hammer20, where he was Deputy Chief. He served as chief of the York Fair Fire Department. In addition to his wife, he is survived by a daughter, Kathy Stahle Hughes and her husband, Richard of North York Borough; a son, Richard Stahle, Jr. and his wife, Ashley of West York Borough; seven grandchildren, Dylan Hughes, Ale’zaye Stahle, Ethan Hughes, Aiden Hughes, Draydon Stahle, Kalen Hughes and Kaemon Stahle; and three brothers, James Stahle of Mt. Wolf, PA, Robert Stahle of York and Patrick Stahle of York. He was preceded in death by a brother, Wayne Stahle. A graveside service will be held Tuesday, September 8, 2020 at 2:00 p.m. at Susquehanna Memorial Gardens, 250 Chestnut Hill Road, York, PA with the Rev. Kevin T. Shively, officiating. Family and friends should meet at the entrance to Susquehanna Memorial Gardens by 1:45 p.m. Tuesday. In lieu of flowers, memorial contributions may be made to the York County Community Foundation, Attn: Fuel Their Fire Scholarship Fund, 14 West Market Street, York, PA 17401. Arrangements by the Etzweiler Funeral Homes and Cremation Service, 1111 E. Market St. York, PA 17403.

The family of Richard W. Stahle Sr. created this Life Tributes page to make it easy to share your memories.

Send flowers to the Stahle family.