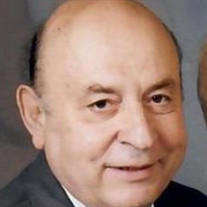 Richard Baugher “Dick” Ault, 90, of York, died peacefully on Saturday, August 14, 2021. Born in Maytown, Lancaster County on October 12, 1930, he was the son of the late George N. and Mary K. (Baugher) Ault. Dick was the loving husband of the late Anne (Lanningham) Ault, who preceded him in death on February 24, 2018. He is survived by his beloved son, Richard Lanninham “Rick” Ault and several cousins. Dick was a 1948 graduate of West York High School. He graduated from Elizabethtown College and later earned his M.Ed. from Western Maryland College. He started his career with the Dallastown School District as a teacher and later became the Principal of York Township Elementary School, for a total of 42 ½ years. Dick was a member of the PA National Guard, serving in the Guard’s 2nd Light Armored Division. He was an active member of York First Church of the Brethren, serving as both a church Deacon and on the church board. He was president of the SPCA of York County from 1967-1970. He was also president of Ault’s RV Center in Glen Rock. Dick had a love for animals, especially his championship Irish Setters that he raised and his pony “Skip”. He loved to travel with his wife Anne. A funeral service will be held Wednesday, August 18, 2021 at 11:00 a.m. at the Etzweiler Funeral Homes and Cremation Service, 1111 East Market Street, York, with Pastor Joel Gibbel officiating. Interment will follow in Fairview Cemetery, Wrightsville. The family will receive friends at the funeral home on Wednesday from 10:00 to 11:00 am. In lieu of flowers, contributions in Dick’s memory may be made to the SPCA of York County, 3159 Susquehanna Trail North, York, PA 17406 or York First Church of the Brethren, 2710 Kingston Road, York, PA 17402. Arrangements by the Etzweiler Funeral Homes and Cremation Service, 1111 E. Market St. York, PA 17403.

The family of Richard Baugher "Dick" Ault created this Life Tributes page to make it easy to share your memories.

Send flowers to the Ault family.