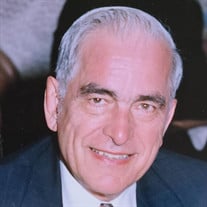 Ray Austin Wilson, MD, 90, of York died March 6, 2022 at The Brunswick at Longstown. Born August 3, 1931 in York, he was the son of the late George A. and Vera I (Himmelright) Wilson. Following his Third Year of Medical School, Ray married his high school sweetheart, Margaret (McCormack) Wilson in 1956. Ray and Margaret were married for 62 years prior to her death in 2018. Ray was a 1949 graduate of William Penn Senior High School where he was Class President during his senior year. He graduated from Johns Hopkins University in 1953 where he was a member of the football team and Phi Kappa Psi Fraternity. Ray was a 1957 graduate of the University of Maryland School of Medicine and served his Internship and General Medicine Residency at York Hospital from 1957 to 1958. Dr. Wilson joined with Dr. John Woodside to form the Susquehanna Medical Clinic in East Prospect. Ray retired from his medical practice after 35 years. Dr. Wilson and Margaret’s two brothers founded Wilmac Corporation in 1957. He served as Medical Director at three of that company’s nursing homes over the course of his career, while also serving as its Vice President of Medical Affairs until his retirement in 2017. Dr. Wilson’s higher education was made possible by the benevolence of a family friend, Joe Kindig, Jr. Ray never forgot this kindness and during his lifetime he has helped numerous individuals attain their goals of going to college. Upon the sale of the Wilmac family business, Dr. Wilson’s sons established the Dr. Ray A. Wilson Family Fund with the intent of continuing Dr. Wilson’s legacy of helping financially challenged young men and women who are interested in a career in medicine. Dr. Wilson’s medical memberships include: York County Medical Society, Pennsylvania Medical Society, American Medical Association, American Academy of Family Physicians, and American Geriatrics Society. He was also a member of the Pennsylvania Health Care Association, Pennsylvania Medical Directors Association, and the American Medical Directors Association. He was a member of the East Prospect Lions Club from which he received several community service awards. He was a member of the Country Club of York, and a past member of Out Door Country Club, Regents’ Glen Country Club, Seaview Country Club, and Quail West Country Club. He and Margaret were longtime communicants of St. John’s Episcopal Church in York. Ray enjoyed traveling the world with Margaret, playing bridge with his wife in their bridge clubs, playing golf with his friends and his sons, and spending time with his grandchildren whom he mentored into adulthood. Ray is survived by his 3 sons, Stephen Wilson and his wife, Susan of Monkton, MD, Michael Wilson, MD and his wife, Sandra of York, and David Wilson, MD of York; his 4 grandchildren, Thomas Wilson, Tristan Wilson, Renee Wilson, and Bradley Wilson; and his sister, Lorna Rogers of Delray Beach, FL. Funeral services will be held Saturday, March 19, 2022 at 11:00 a.m. at St. John Episcopal Church, 140 North Beaver Street, York, PA 17401 with The Rev Eric Hillegas, officiating. Burial will be in Mount Rose Cemetery. In lieu of flowers, memorial contributions may be made to: American Cancer Society, P.O. Box 30386, Philadelphia, PA 19103 (www.cancer.org); Alzheimer’s Association P.O. Box 96011, Washington, DC 20090-6011 (www.alz.org); or to the Dr. Ray A. Wilson Family Fund of YCCF, payable to YCCF with the fund name in the memo, 14 West Market Street, York, PA 17401 (www.yccf.org) or a favorite charity of your choice. Arrangements by the Etzweiler Funeral Homes and Cremation Service, 1111 East Market Street, York, PA 17403.

Ray Austin Wilson, MD, 90, of York died March 6, 2022 at The Brunswick at Longstown. Born August 3, 1931 in York, he was the son of the late George A. and Vera I (Himmelright) Wilson. Following his Third Year of Medical School, Ray married... View Obituary & Service Information

The family of Ray Austin Wilson MD created this Life Tributes page to make it easy to share your memories.

Send flowers to the Wilson family.