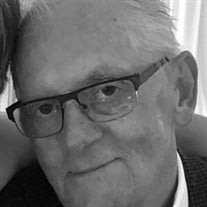 Randall J. "Randy" Elfner, 76, of York died February 7, 2021 at York Hospital. He was the loving husband of Gail K. (Gordon) Elfner. They celebrated their 51st wedding anniversary on June 14, 2020. Born November 20, 1944 in York, he was the son of the late Ray W. and Mary Frances (Frey) Elfner. Randy was a 1962 graduate of Eastern York High School. Following high school, he enlisted in the U.S. Army. He was stationed in Germany from 1962-1965 where he was a member of the Berlin Brigade. He served with the B (Bravo-Bear) Company of the 2nd Battalion, 6th Infantry. While in Germany, he guarded the Berlin Wall & Spandau Prison. He was an Under Guard when President John F. Kennedy visited there. He finished his service in the U.S. Army as a Sargent and was a member of the Berlin Veterans Association. Following his service in the Army, Randy returned to York and was employed at Caterpillar for 41 years. He retired as a Security/Safety Officer in 1996. Randy was a long time member of Zion United Methodist Church in East Prospect. He wanted to be remembered as a devoted Christian and thought of himself as just an "average Joe." He enjoyed the simple things in life especially spending time with his family. They vacationed for many years in Myrtle Beach. He took great pride in his home, especially working in his yard. He also loved reading, particularly historical books. Above all, Randy loved spending time with his grandson Nick, with whom he had a very special bond and was his #1 soccer fan. Randy is survived by his loving wife Gail, son Matthew Randall and his wife Beth of Hellam, his grandson, Nicholas M. "Nick" Elfner; and his extended family which includes his sisters-in-law, brothers-in-law, an aunt and uncle, and cousins. He is also survived by many nieces and nephews whom he adored. Following cremation, a private graveside service will be held at a later date at Riverview Cemetery, East Prospect. Graveside Military Rites will be conducted by the York County Veterans Honor Guard. Memorial contributions may be made to Zion United Methodist Church, 1 North Main Street, East Prospect, PA 17317. Arrangements by the Etzweiler Funeral Homes and Cremation Service, 1111 E. Market St., York, PA 17403.

The family of Randall J. Elfner created this Life Tributes page to make it easy to share your memories.

Send flowers to the Elfner family.