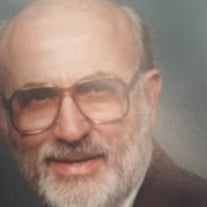 Ralph W. Zepp, 97, of West York, died peacefully at Country Meadows – York West on Thursday, December 9, 2021. Born in Hanover on September 8, 1924, he was the son of the late Levi C. and Cora C. (Berwager) Zepp. Ralph was preceded in death by his first wife Jeri “Toot” (Plymire) Zepp and his second wife Victoria M. (Mobley) Zepp. Ralph was a 1942 graduate of Littlestown High School. He was a machinist for BorgWarner, later York International, and retired from Johnson Controls. He was a member of Faith United Church of Christ, York. In his retirement Ralph loved to travel. He made it to every state except Hawaii, missing the island state for a journey to Switzerland. He loved to go with his daughter to see his son’s band the “Jedzons” perform. Ralph loved his sweets, especially New York cheesecake, which he couldn’t say no to. Ralph is survived by his son, Randy Zepp of York; his daughter, Kimberly Zepp of Lancaster; his granddaughter, Abby Breneman of York; his sister, Janet Hart of Hanover; and his sister-in-law, Elizabeth Eppehimer of Lancaster. He is also survived by his stepson, William Triggs, III of Nashville, TN; his stepdaughter, Kathleen Byrne and her husband, Brian of Martinsburg, WV; and his step-grandchildren, Jackie Triggs, Billy Triggs, Kate Byrne, and Michael Byrne. Funeral services for Ralph will be held Wednesday, December 15, 2021 at 1:30 p.m. at the Etzweiler-Koller Funeral Home and Cremation Service, 2000 West Market Street, York, with the Rev. Dr. Ronald Oelrich officiating. Interment will follow in Mount Rose Cemetery. The family will receive friends at the funeral home on Wednesday from 1:00 p.m. until the time of service. In lieu of flowers, contributions in Ralph’s memory may be made to Faith United Church of Christ, 509 Pacific Avenue, York, PA 17404. Arrangements by the Etzweiler-Koller Funeral Home and Cremation Service, 2000 W. Market St. York, PA 17404.

The family of Ralph W. Zepp created this Life Tributes page to make it easy to share your memories.

Send flowers to the Zepp family.