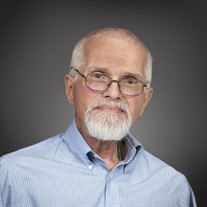 On October 4, 2021, R. Michael “Mike” Ehrhart age 75, passed away peacefully while surrounded by family after a lengthy illness. Mike was born June 28, 1946, in York, Pennsylvania to Robert Eugene Ehrhart and Anna Josephine Smith (Shelley). Mike was a 1964 graduate of William Penn Senior High School and a 1967 graduate of the Commonwealth of Pennsylvania Journeyman Machinist Apprenticeship program. After graduating, Mike gained employment with the John C. Motter Printing Press Company. In 1994, Mike retired from Caterpillar Tractor Company and started a new career with Jones Manufacturing of York, where he worked until stricken by illness. Mike is survived by his wife of fifty-one years, Kaye (Gibbs) Ehrhart; stepbrother, Donald Shelley and his wife, Barbara of Dover, PA; son, Jason Ehrhart of Hanover, PA; daughter, Teri and her husband Chadd Williams of York, PA; four grandchildren, Victoria Heckert of Pittsburgh, PA, Haley Pfefferkorn, Meghan and Logan Ehrhart, all of York, PA. He is preceded in death by a grandson, Colin Ehrhart. Mike was a Corvette enthusiast and he loved entering his restored 1979 C3 blue T-Top Vette at area classic car shows. He served as a Sunday School teacher, a teen choir director, and a church pianist. Mike and Kaye attended Lighthouse Baptist Church of Dover, PA, and they both enjoyed weekend beach getaways, bus trips, and ocean cruises together. Mike was a kind, soft-spoken and generous man who believed his greatest accomplishment was his family. Mike was a dedicated Christ-follower, and at the end of his life, he was excited to spend eternity with his Savior. A celebration of life service will be held at 11:00 a.m., on Saturday, October 16, 2021, at the Etzweiler Funeral Homes and Cremation Service located at 1111 East Market Street, York, PA. Visitation with the family will begin at 10:00 a.m. Majors Walter & Marta Droz (Ret.), of the Salvation Army, will be officiating the service. Burial will be private. In lieu of flowers, the family has requested a charitable donation be made to the American Heart Association and/or the Tunnels 2 Towers foundation. Arrangements by the Etzweiler Funeral Homes and Cremation Service, 1111 E. Market St., York, PA 17403.

The family of R. Michael "Mike" Ehrhart created this Life Tributes page to make it easy to share your memories.

Send flowers to the Ehrhart family.