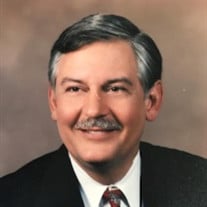 Peter R. Andrews, Esq., 82 years old died peacefully surrounded by loved ones on May 24th, 2022. He was the son of the late Albert and Virginia (Thompson) Andrews and stepmother, J. Elizabeth (McDougall) Andrews, and grew up in Bethlehem, Pennsylvania before heading to Dickinson College and Law School in Carlisle. There he met the love of his life, his wife of nearly 60 years, Sandra C. Andrews. After achieving top marks in his ROTC military training, he chose to serve at the Pentagon during Vietnam. They lived in Washington D.C. and later settled in York, where they had two loving daughters and where Pete joined his law school friend, Jon Countess at the Laucks & Monroe Law firm. They, along with Gary M. Gilbert and several other attorneys created the CGA Law Firm that continues to serve the community. He loved family beach and ski trips, great food, wine, theater, music, traveling with friends, a good book, a great scrabble game, a challenging puzzle and most of all spending time with his family. With his great sense of humor and sense of adventure blending with his motto of “be different” they built a contemporary solar home in the country and rescued a donkey and several dogs and cats over the years. He had a great love of cars, but especially his 1952 Jaguar convertible in which he roared down many country roads. He was involved in many professional activities in York and was especially proud of his involvement in the Industrial Economic Development Association and the York Revolution stadium. In his recent retirement, he and his wife became regulars at several places in York-The Left Bank, The Cove, Crimson, Victors, and Vitos. He and some friends had started the “round table” that met at several places regularly for many years. He is survived by his loving wife, Sandra C. Andrews, daughter, Kate Griffith, her husband Brian Griffith and their children Peter R. Griffith and Elaine D. Griffith. He is also survived by his daughter, Meg Noble, her husband Neal R. Noble and their children, Rory T. Noble and Theo A. Noble. Additionally, he is survived by his sisters, Carol Otten and Barbara Carter, cousin Annie Durloo and many loved nieces, nephews, great-nieces and great-nephews. He was larger than life and a great inspiration to his family. We are so proud of the life he led and the example he provided. A celebration of life will be held Saturday, June 18, 2022 from 10:30 a.m. to 1:30 p.m. at the Country Club of York, 1400 Country Club Road, York, Pa. Donations can be made in his honor with the York County SPCA, Farm Natural Lands Trust or other charitable organizations. Arrangements by the Etzweiler Funeral Homes and Cremation Service, 1111 E. Market St., York, PA 17403.

Peter R. Andrews, Esq., 82 years old died peacefully surrounded by loved ones on May 24th, 2022. He was the son of the late Albert and Virginia (Thompson) Andrews and stepmother, J. Elizabeth (McDougall) Andrews, and grew up in Bethlehem, Pennsylvania... View Obituary & Service Information

The family of Peter R. Andrews Esq. created this Life Tributes page to make it easy to share your memories.

Send flowers to the Andrews family.