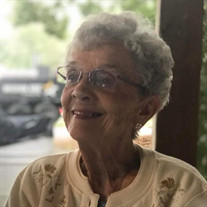 Pauline L. “Polly” Almoney, age 87, of Hellam Township, died peacefully at home on Thursday, February 24, 2022. Born in Johnstown on October 22, 1934, she was the daughter of the late Paul and Anna (Johnston) Spangler. She was the wife of the late Nelson Klinedinst and the late William R. Almoney, Sr. Polly was a graduate of York Junior College, receiving her degree to become a medical secretary. She also studied at Gettysburg College. She later worked as a bus driver for Eastern York School District for many years and was beloved by the many students she transported. She was a member of Druck Valley United Methodist Church and served on the church’s Ladies Auxiliary. Music was very instrumental in Polly’s life. She played the piano for many, many years for Druck Valley United Methodist, Wrightsville Trinity Lutheran Church, and Susquehanna Grace Brethren Church. Later in life she would volunteer at nursing homes, entertaining the residents with her piano melodies. Polly was a member of Steam-O-Rama and the Farm Women. She enjoyed chicken herding, arts and crafts, traveling, and flower gardening. Above all, Polly loved to spend time with friends and family, especially the time spent with her grandchildren and great-grandchildren. Polly is survived by her children, Michael Bunn and his wife, Lynn, John Bunn and his wife, Ann, Chris Klinedinst and her wife, Cindy Frey, and Ed Klinedinst. She is also survived by her brother, Paul Spangler; her daughter-in-law, DonnaVee Almoney; her grandchildren, Michael, Rebecca, Thomas, Dylan, Cooper, Dakota, Kevin, and Brett; and her 17 great-grandchildren. She was preceded in death by her brother, Daniel Spangler; her sister, Cathy Smith; her stepson, William Almoney, Jr.; and her beloved grandson, Devin Bunn. A memorial service for Polly will be held at 1:00 p.m. on Saturday, April 30, 2022 at the Hellam Fire Company, 163 East Market Street, Hellam (parking and entrance to the fire company’s social hall is in the rear of the building). Private interment in Fairview Cemetery, Wrightsville. Contributions in Polly’s memory may be made to Druck Valley United Methodist Church, 4481 Druck Valley Road, York, PA 17406. Arrangements by the Etzweiler Funeral Homes and Cremation Service. 700 Hellam Street, Wrightsville, PA 17368.

The family of Pauline L. "Polly" Almoney created this Life Tributes page to make it easy to share your memories.

Send flowers to the Almoney family.