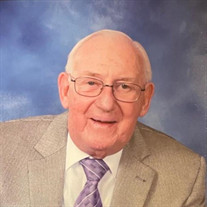 Paul Raymond Summers, 91, of York passed away on December 25, 2020 at his home. Born April 28, 1929, he was the son of the late Harry L. and Margaret (Stagemyer) Summers. Paul is survived by his wife of 13 years, Kathryn (Redding) Meyers Summers of York and was preceded in death by his first wife of 57 years, the late Mary (Reindollar) Summers. In addition to Kathryn, Paul is survived by his daughter, Susan Moser and son-in-law, Gary Moser of Brookville, PA; 2 sons, Jeffrey Summers of York and Tim Summers of Laurel, MD; 5 step children, Timothy (Sayoko) Meyers of Chantilly, VA, Beverly (Bruce) Vieth of Egg Harbor Twp., N.J., Rachel (Russ) Cain of Frederick, MD, Matthew (Martina) Meyers of York, and Martha (Scott) Smith of Foxboro, MA; 3 granddaughters and their spouses; 11 step grandchildren; 7 great grandchildren with an eighth on the way; 15 step great grandchildren; a brother, Kenneth and his wife, Jane Summers of York; and numerous nieces and nephews. He was preceded in death by his brother, Harry Summers, Jr. Paul served in the United States Air Force from 1952-1956, mostly in Cheyenne, Wyoming at EF Warren Air Force Base. Paul worked at the former York Bank and Trust Company (now M&T Bank) from 1946-1990. When he retired, he was a Vice President in charge of over 20 branches. Paul was a 1946 graduate of William Penn Senior High School. He was an active member of the former Bethany UCC until 2007, taking part in the golf and bowling teams and serving many years on the consistory, finance committee, treasurer, etc. In 2007, he joined Bethlehem UMC in Dallastown. Paul enjoyed spending his retirement traveling, playing golf, bowling, racquet ball and working out at the YMCA which was one of his favorite charities. He also enjoyed biking on the York Rail Trail and was an ambassador for the Rail Trail. Paul was a member of the Dover and York Lions Club. He was involved with the Northeast PA Lions Eye Bank and served on the Board of Directors Executive Committee. He was a member of Contact York and was a life member of the York Fair where he spent many years in the financial office. He volunteered for Habitat for Humanity, the WELL, and the American Cancer Society where he helped drive cancer patients. Paul was a member of Zeredatha Lodge #451, F.&A.M. where he was a trustee for the lodge, Tall Cedars of Lebanon, York Forest #30, Harrisburg Consistory, Zembo Temple, York County Shrine Club, and First Capital High Twelve Club. Graveside services will be private at Prospect Hill Cemetery in York with his pastor, the Rev. Roger H. Mentzer, officiating. A memorial service will be held at a later date at Bethlehem UMC in Dallastown. In lieu of flowers, charitable donations may be made to YMCA of York County, 90 North Newberry Street, York, PA 17401, or to Bethlehem UMC, 109 East Main Street, Dallastown, PA 17313, or to Home Instead Senior Care, 1544 Carlisle Road, York, PA 17408, or to Hospice and Community Care, 235 St. Charles Way, #250, York, PA 17402. Arrangements by the Etzweiler Funeral Homes and Cremation Service, 1111 E. Market St., York, PA 17403.

Paul Raymond Summers, 91, of York passed away on December 25, 2020 at his home. Born April 28, 1929, he was the son of the late Harry L. and Margaret (Stagemyer) Summers. Paul is survived by his wife of 13 years, Kathryn (Redding) Meyers Summers... View Obituary & Service Information

The family of Paul Raymond Summers created this Life Tributes page to make it easy to share your memories.

Send flowers to the Summers family.