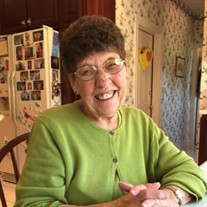 Patricia A. “Pat’ Glatfelter, 87, of York died February 4, 2022 at her residence. She was the wife of the late David E. Glatfelter. Pat and Dave were married for 67 years prior to his death in 2020. Born October 22, 1934 in York, Pat was the daughter of the late Charles and Viola (Quickel) Baker. Pat was a graduate of William Penn Senior High School. She was employed by Danskin for many years as a payroll clerk and The Bon Ton in office administration. Pat was an avid sports fan. She especially enjoyed attending her grandchildren’s soccer, baseball and basketball games. She was their loudest fan. Family gatherings were also a highlight in her life. Later in life she maintained her sports enthusiasm watching college football and basketball with Duke being her favorite team. Pat and Dave were both dog lovers and had family pets throughout their 67 year marriage. Pat was also surrounded by good neighbors who watched over her in her later years. The family is forever grateful. She is survived by her daughter, Deb and her husband, Virgil Haplea, of Doylestown; a son, David Glatfelter of York; son-in-law, Jack Everhart of York; six grandchildren, Seth Everhart, Adam Everhart, Christopher Haplea, Michael Haplea, Brad Glatfelter and Jenna Mills; and five great grandchildren, Evan and Mason Everhart, Joseph Glatfelter, and Everly and Corinne Mills. She was preceded in death by her daughter, Sharon Everhart, daughter-in-law, Beverly Glatfelter; two sisters, Phyllis Wise and Betty Cooper; and 3 brothers, Jack, Charlie, and Mike Baker. Graveside services will be held Thursday, February 17, 2022 at 11:00 a.m. at Mount Rose Cemetery, 1502 Mt. Rose Ave., York. Family and friends should meet at the entrance of the cemetery at 10:45 a.m. In lieu of flowers, memorial contributions may be made to Hospice and Community Care, P.O. Box 4125, Lancaster, PA 17604. Arrangements by the Etzweiler Funeral Homes and Cremation Service, 1111 E. Market St., York, PA 17403.

The family of Patricia A. "Pat" Glatfelter created this Life Tributes page to make it easy to share your memories.

Send flowers to the Glatfelter family.