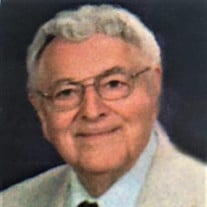 Monroe W. Good, 90, was transported peacefully to his celestial residence on November 24, 2021, surrounded by family. He was born and resided in Brecknock Twp., East Earl, till 2008 when he built his retirement home near his son, Dr. Garth Good, in York. Monroe was the son of Monroe H. and Katie (Witwer) Good. He was a dairy and poultry farmer and a member of Garden Spot Young Farmers Association. He also served as real estate agent from 1983 to 2007. He was a “jack of all trades.” Monroe attended Twin Valley Bible Chapel, serving as an usher and van driver for the youth ministry. After moving to York, he attended the Church of the Open Door. He was married to Miriam (Landis) Good, with whom he celebrated their 63rd wedding anniversary. God blessed their marriage with four children; Kristine, wife of M. Curtis Wilson of Colorado; Gary, husband of Michelle Gettle Good, Greg, husband of Kathy Shoop Good of Ohio, and Garth, husband of Andrea Hoober Good of York; eight grandchildren; and eight great grandchildren. He also was father to four teen foster boys. He had five siblings, Mildred, wife of Enos Hess, Arlene, wife of H. Earl Martin, Leon, husband of Pearl Petersheim Good, Richard, husband of Irene Hurst Good, and Clair, husband of Pauline Weinhold Good. He was preceded in death by a brother, Leon; sister, Mildred; a son, Gary; and an infant granddaughter. Monroe enjoyed hunting, fishing, and camping trips with his family. For 60 years he looked forward to the weekend mountain retreats with friends who acquired the name, mountain gang. He enjoyed getting together with circle friends, a group of 12 couples formed in dating years and continue to share the ties that bind. After retirement, he enjoyed helping the children with their home projects where his creativity was greatly appreciated. At the onset of winter, he joined the snowbirds traveling to the sunny south where he enjoyed making new friends and refreshing old acquaintances. Memorial services will be held at the Church of the Open Door, 8 Carlisle Court, York, PA 17408, on Tuesday, January 18, 2022 at 10:30 a.m., followed by a luncheon. In lieu of flowers, memorial contributions may be made to Hospice and Community Care, P.O. Box 4125, Lancaster, PA 17604. Arrangements by the Etzweiler Funeral Homes and Cremation Service, 1111 E. Market St., York, PA 17403.

Monroe W. Good, 90, was transported peacefully to his celestial residence on November 24, 2021, surrounded by family. He was born and resided in Brecknock Twp., East Earl, till 2008 when he built his retirement home near his son, Dr. Garth... View Obituary & Service Information

The family of Monroe W. Good created this Life Tributes page to make it easy to share your memories.

Monroe W. Good, 90, was transported peacefully to his celestial...

Send flowers to the Good family.