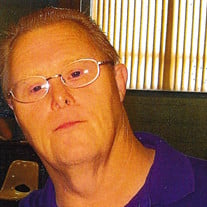 On October 12, 2021, Angels carried Michael B. Strickler, 68, into Heaven. He was the son of Ann (Downs) and Stanley Leber of York Michael was born August 11, 1953 in York. Michael worked many years for Shadowfax Corp. He was a long-time member of Yorkshire United Methodist Church. Michael was a man of God and the epitome of love and kindness. He will be remembered for his infectious smile, his hugs and his musical talent. He volunteered at many blood drives and made meals for shut-ins and the Women and Children’s Center. He played the melody harp at different churches and nursing homes. Michael was a member of the Hosanna Ringers Bell Choir at Jessica and Friends. He also volunteered at Misericordia Nursing Home and knitted hats on the loom and donated well over 100 of them to people. With his aide he volunteered with the Servants Program and other programs too numerous to mention. Michael was very involved in York County Special Olympics where he competed in bowling and bocce ball. He won gold medals in bowling with the York County Special Olympics and won a silver medal in the Pennsylvania Special Olympics. He attended Camp Hope for many years. Michael loved driving the golf cart. In addition to Ann and Stanley, Michael is survived by his sister, Laurie and her husband, Gary Dettinger of York; brother, Matthew and his wife, Lacey Leber of Wrightsville; a niece, Maelynn Leber; 3 nephews, Trey Barnett, Myles Strickler, and Devin Strickler and a sister-in-law, Stacy Strickler of York. He was preceded in death by his brother, David W. Strickler. Viewings will be held Tuesday, October 19, 2021 from 6:00 to 8:00 p.m. and Wednesday, October 20 from 10:00 to 11:00 a.m. both at Yorkshire Church, 125 Edgewood Road, York. A funeral service will follow the viewing on Wednesday at 11:00 a.m. at the church with Pastor Dave Kominsky and Rev. Forrest “Bud” Bish officiating. Private burial will be in Susquehanna Memorial Gardens. The family would like to extend a special thank you to all Michael’s caregivers for all the love and support they gave over the years. In lieu of flowers, memorial contributions may be made to Yorkshire Church, 125 Edgewood Road, York 17402, or Jessica and Friends Community, 1625 East Market Street. York, 17403, or a charity of your choice. Arrangements by the Etzweiler Funeral Homes and Cremation Service, 1111 E. Market St., York, PA 17403.

On October 12, 2021, Angels carried Michael B. Strickler, 68, into Heaven. He was the son of Ann (Downs) and Stanley Leber of York Michael was born August 11, 1953 in York. Michael worked many years for Shadowfax Corp. He was a long-time... View Obituary & Service Information

The family of Michael B. Strickler created this Life Tributes page to make it easy to share your memories.

Send flowers to the Strickler family.