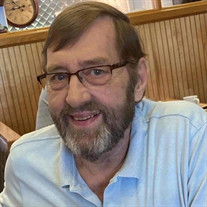 Michael E. Hoff, age 69, of East Prospect, died peacefully on Monday, September 13, 2021. Born in York, he was the son of the late Roger A. and Gloria (Gladfelter) Hoff. Mike was the loving husband of 51 years to Roxanne (Kauffman) Hoff. Mike was a 1969 graduate of Dallastown High School. He retired from Duplex/Reynolds and Reynolds, where he worked as a pressman for many years. He was a founding member of the Canadochly Valley Ambulance Club. He was an EMT and taught CPR for many years at the ambulance club. He was a lifetime member of the Wrightsville Social Club, the Wrightsville Legion, Post #469, and the Hawk Gunning Club. He was also a member of the Foresters of America, Columbia. He could often be found tending bar part-time at the Foresters and the Wrightsville Legion. Mike had a very giving spirit, and would do anything for anybody in need. He loved his family, and especially cherished time spent with his grandchildren and great-grandchildren. He will be greatly missed. In addition to his wife Roxanne, Mike is survived by his daughter Angela Bagley, and her husband Jonathan of Mountville, his son Adam Hoff, and his fiancé Danielle Peters of Wrightsville, his brothers Scott Hoff, and his wife Bonnie of New Holland and Cork Welsh, and his wife Kelly of Florida, his grandchildren Aaron Boyer, Miranda Garrett, Brynne Hoff, Tabitha Schmitt, Zander Peters, and Noah Cunningham, and his great-grandchildren Caden Boyer, and Eliana and Olivia Schmitt. A memorial service to celebrate Mike’s life will be held at 11:00 am on Saturday, September 18, 2021 at Zion United Methodist Church, 1 North Main Street, East Prospect. The family will receive friends at the church on Saturday from 10:00 to 11:00 am. Private Interment in Riverview Cemetery, East Prospect will be held at the convenience of the family. In lieu of flowers, contributions in Mike’s memory may be made to the Canadochly Valley Ambulance Club, 45 South Main Street, Wrightsville, PA 17368. Arrangements by the Etzweiler Funeral Homes and Cremation Service, 700 Hellam Street Wrightsville, PA 17368.

Michael E. Hoff, age 69, of East Prospect, died peacefully on Monday, September 13, 2021. Born in York, he was the son of the late Roger A. and Gloria (Gladfelter) Hoff. Mike was the loving husband of 51 years to Roxanne (Kauffman) Hoff. Mike... View Obituary & Service Information

The family of Michael E. Hoff created this Life Tributes page to make it easy to share your memories.

Send flowers to the Hoff family.