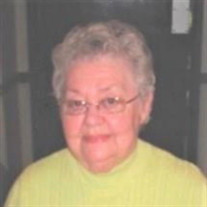 Mary F. Sloan, 94, of York died June 12, 2022 at Misericordia Nursing and Rehabilitation Center. She was the wife of the late Donald R. Sloan. Mr. and Mrs. Sloan were married for 39 years prior to Don’s death in 1997. Born January 14, 1928 in York County, she was the daughter of the late John Ivan and Della (Long) Shue. Mary retired from Gent-l-kleen where she was involved with inside sales. Mary was a graduate of Central York High School. She loved spending time with her family and friends especially time at the beach. She would enjoy driving to different parts of the country and shopping. Mary is survived by her 2 daughters, Risa Anderson and her husband, Barry of Spring Grove and Lisa Irizarry and her husband, Angel of York; 4 grandchildren, Jonathan Stouch, Benjamin Stouch, Nicholas Irizarry and his wife, Ali and Michael Irizarry; 4 great grandchildren; a brother, John Shue and his wife, Nansie; and several nieces and nephews. She was preceded in death by her daughter, Vicki Harman; 2 brothers, Charles and Herman Shue; and a sister, Zelda Greene. Funeral services will be held Friday, June 17, 2022 at 12:00 Noon at the Etzweiler-Koller Funeral Home and Cremation Service, 2000 W. Market Street, York. Burial will be in Prospect Hill Cemetery. A viewing will be held Friday from 11:00 a.m.-12:00 Noon. In lieu of flowers, memorial contributions may be made to Windy Hill Senior Center, 1472 Roth's Church Road, Suite 103, Spring Grove, PA 17362 or to a charity of your choice. Arrangements by the Etzweiler-Koller Funeral Homes and Cremation Service, 2000 W. Market St. York, PA 17404.

The family of Mary F. Sloan created this Life Tributes page to make it easy to share your memories.

Send flowers to the Sloan family.