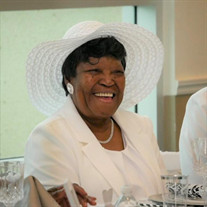 Mary Ella Curlene Irons-Lamb-Bennett-Woodard, the daughter of the late James and Clara Irons, was born on December 22, 1929, in Syracuse, New York. After a brief illness, “Curlene” went home to be with the Lord on November 28, 2021. She was married to the love of her life, the late Freddie Edward Woodard AKA “Big Freddy” for 58 years until his passing in 2015. Early on, Mary moved to York, Pennsylvania with her family. She began her education at Aquilla Howard Elementary School. Mary graduated from William Penn Senior High School in 1947. Throughout her professional career, she was employed at various companies until she retired in 2006 from the Crispus Attucks Community Center in York, Pennsylvania. Ten years after retirement, Mary decided to leave the cold winters behind and move to sunny Boynton Beach, Florida to be with her youngest son, Woody Bennett and his wife, Erma. She lived with her two loving daughters, Leanie and Nellie who took excellent care of her. Woodrow wanted “Mommy” to move to Florida to extend her Golden years, and to God be the Glory, that it did. Mary was a proud mother of many children (birthing 7). She would take you under wing and nurture, encourage, and love everyone. That is what she did, always caring and there for anyone, no matter the need. Mary loved spending time with her family, playing cards, traveling, and bingo. In addition to her parents and husband, Mary was preceded in death by two sons, Frederick Alexander Woodard, AKA “Little Freddie” and Henry Shade Bennett, AKA “Shade”; a daughter, Charlotte Elizabeth Woodard (who passed as an infant); 4 brothers, Clayrie Williams, James Williams, Clarence Irons, and Charles Irons; and a sister, Margie Irons Laws. She is survived by a son, Woodrow Bennett, Jr., AKA “Woody” (Erma) of Boynton Beach, FL; 5 daughters, Kimbra Delores Bennett-Henderson-Kinnard , AKA “Kim” (Greg), Clara Eileen Woodard, AKA “Leanie”, Nellie Annette Woodard, AKA “Nellie”, Freda Macklin (Mark), and Tracey Woodard, all of York, Pennsylvania; 16 grandchildren; 49 great grandchildren; 54 great great grandchildren; as well as a host of nieces, nephews, other relatives, and friends. Funeral services will be held Thursday, December 9, 2021 at 10:00 a.m. at Bethel A.M.E. Church, 350 West Princess Street, York, PA with Rev. Dr. Katherine Rose, officiating. Burial will be in Lebanon Cemetery. A viewing will be held Thursday from 9:00-10:00 a.m. at the church. Arrangements by the Etzweiler Funeral Homes and Cremation Service, 1111 E. Market St. York, PA 17403.

The family of Mary Ella Curlene Irons-Lamb-Bennett-Woodard created this Life Tributes page to make it easy to share your memories.

Send flowers to the Irons-Lamb-Bennett-Woodard family.