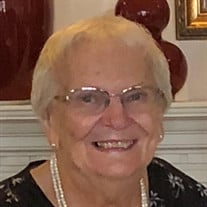 Mary E. (Desmarais) Castonguay, 89 of York, PA, died at her residence on July 13, 2021. She was the wife of the late Henry P. Castonguay to whom she was married for 60 years prior to his death in February 2016. Born June 21, 1932 in Nashua, NH, she was the daughter of the late Edward L. and Grace (Dalton) Desmarais. She was a 1950 graduate of Nashua High School in Nashua, NH. Mary retired from Energynorth, Inc (Formerly Gas Service, Inc, now known as AmeriGas) in 1994, after more than 22 years of service. Following her retirement, Mary volunteered at the Nashua Senior Activity Center, working many years in the membership office. She was also a volunteer at St. Joseph The Worker Parish and St. Louis Cemetery Office. Mary and Henry enjoyed square dancing belonging to the Litchfield Swingers and Manchester Heel and Toe square dance clubs. Mary is survived by three daughters and their husbands, Marie and Jerry Poate of Londonderry NH, Theresa and Bruce Wilson of Franklin VA and Linda and Michael Castonguay-Marks of York PA; five grandchildren, Karissa (Wilson) Franklin of Virginia Beach, VA, Ivan Poate of Manchester NH and Desiree, Christian and Nathan Castonguay, all of York PA; a brother and his wife, Ralph and Nancy Desmarais of Maumelle, AR; a brother-in-law and his wife, Maurice and Gail (Williams) Castonguay of South Harpswell, ME and many nieces, nephews and cousins. In addition to her parents, Mary was also predeceased by four brothers, Edward, Robert, Richard & Raymond Desmarais. Following cremation, an informal gathering to celebrate Mary’s life will be held from 4:00-8:00 p.m. on Thursday, July 15, 2021 at Senior Commons Independent Living, 1765 Powder Mill Road, York, PA 17403. Arrangements by the Etzweiler Funeral Homes and Cremation Service, 1111 E. Market St. York, PA 17403,

The family of Mary E. (Desmarais) Castonguay created this Life Tributes page to make it easy to share your memories.

Send flowers to the Castonguay family.