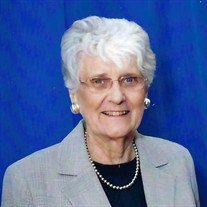 Marjorie Anne Lampe, 84, passed away peacefully in her sleep on August 20, 2020 at Hospice and Community Care, Mount Joy. She was the wife of William T. Lampe, II, MD. They were married for 62 years. Born December 11, 1935 in Abington, PA, she was the daughter of the late Anna L. (Maxwell) and Bernard G. Wise, Jr. Marjorie graduated from West Chester State Teacher’s College in 1957 and began a career in elementary education in the Cheltenham School District in PA. After raising her family, she returned to teaching and chose to teach at Jackson Elementary School in the York City School District. Marjorie was very active in the York Community and served York organizations in many capacities. She was the President of the York Medical Auxiliary from 1976-1977, served on the York Symphony Orchestra Association Board, the York Symphony Board, where she spearheaded music education outreach and was a subscriber to the symphony for over fifty years, Vice-President of the Junior League of York and remained connected there as a Sustainer. Marge and Bill were members of Asbury United Methodist Church where she served as a Trustee, helped to lead the Building Committee through its most recent addition, taught the Hopkins class, was President of United Methodist Women and sang in the Chancel Choir. She was also a Delegate to the United Methodist Conference. Marjorie was also a member of the York YWCA, participated in plays at York Little Theater, and served on the scholarship committee of the West Chester University Alumni Association. Marjorie brought her lifelong commitment to education and her love of nature to everything she did. Including trips to wildlife sanctuaries, bird watching along the Susquehanna and her summers on Long Beach Island, she loved sailing her Barnegat Sneakbox to Flat Island for clamming and was Trustee of the LBI Bodysurfing Federation, Local Chapter, No. 1-BB. Marjorie remained active with swimming, aerobics, and tennis in York and connected to her friends with bridge group. She remained active with friends and young people in conversations, through working puzzles and reading with her grandsons. Her kind words, strength of mind, thoughtful advice, intellectual curiosity and listening ear will be missed by all her knew her and loved her. She was the heart of her family. In addition to her husband, Bill, she is survived by her 4 children, Eileen Lampe, Richard W. Lampe (Peggy), Frederick W. Lampe (Silvia) and Anne M. Lampe (Eric Frith); 5 grandsons; and 3 great grandsons. A memorial service will be held Saturday, August 29, 2020 at 11:00 a.m. at Asbury United Methodist Church, 340 East Market Street, York with her pastor, the Rev. Mark Terwilliger, officiating. Burial will be held at the convenience of the family in Magnolia Cemetery, Philadelphia, PA. Memorial contributions may be made to Martin Library, 159 East Market Street, York, PA 17401 or to the York Symphony Orchestra, 50 North George Street, York, PA 17401 or to a charity of your choice. Arrangements by the Etzweiler Funeral Homes and Cremation Service, 1111 E. Market St. York, PA 17403.

Marjorie Anne Lampe, 84, passed away peacefully in her sleep on August 20, 2020 at Hospice and Community Care, Mount Joy. She was the wife of William T. Lampe, II, MD. They were married for 62 years. Born December 11, 1935 in Abington, PA,... View Obituary & Service Information

The family of Marjorie Anne Lampe created this Life Tributes page to make it easy to share your memories.

Marjorie Anne Lampe, 84, passed away peacefully in her sleep...

Send flowers to the Lampe family.