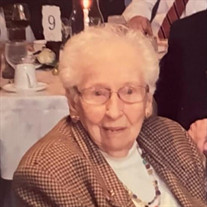 Marguerite G. “Marg” (Duncan) Cleaver, passed away peacefully at UPMC hospital on Monday, November 29, 2021 at the age of 94. Marg was the wife of the late Lloyd E. Cleaver, whom she married on April 16, 1949 and enjoyed 67 years of marriage. She was born in East Berlin, PA on January 28, 1927 to her parents, Gilbert F. Duncan and Flora Gates Duncan-Powell, and was a 1946 graduate of East Berlin High School. She began her career at Pennwood Products, was a homemaker for several years and then worked in the cafeteria at Wilson Elementary School. Prior to her retirement, Marg served as the administrative assistant to the business agent at the BAC Local 5 PA Bricklayers Association. She was a member of Messiah United Methodist Church for over 60 years and loved spending time with friends at the Northeastern Community Senior Center. Marg and Lloyd enjoyed many bus trips with her late sister, Hilda and Hilda’s husband, John Berkheimer. They spent many family weekends together at Hilda and John’s bungalow along the Conewago Creek, as well as at the Lucky Pines, the Cleaver family hunting cabin in Lycoming County. Marg was an avid fan of ice hockey, starting as a spectator at the Hershey Bears’ games with Lloyd and their son Wayne. She later followed Wayne’s ice hockey career and then, alongside Lloyd, was one of her grandson’s biggest fans, watching his success as he played in both the U.S. and Canada. In her later years, she devoted herself to caring for Lloyd until his passing in 2017. She is survived by her son, Wayne Cleaver and his wife, Kim of York, PA, and her grandson, Jason Cleaver and his girlfriend, Emma Martin of New Jersey. She is also survived by her brother, Kenneth Duncan and his wife, Maxine of Red Lion and several nieces and nephews. She was preceded in death by her brothers, Eugene Duncan and John Duncan and her sisters, Hilda Berkheimer, Mildred Duncan, and Betty Leipart. Funeral services will be held Thursday, December 9, 2021 at 1:30 p.m. at the Etzweiler-Koller Funeral Home, 2000 West Market Street, York with Pastor Randall Zeiler officiating. Burial will be in Greenmount Cemetery. A viewing will be Thursday from 12:30-1:30 p.m. at the funeral home. The family is asking for those attending, please wear masks. In lieu of flowers, memorial contributions may be made to a charity of your choice or to Northeastern Community Senior Center, 131 Center Street, Mt. Wolf, PA 17347. Arrangements by the Etzweiler-Koller Funeral Home and Cremation Service, 2000 W. Market St. York, PA 17404.

The family of Marguerite G. Cleaver created this Life Tributes page to make it easy to share your memories.

Send flowers to the Cleaver family.