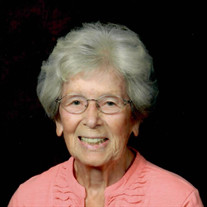 Louise Harnish Poet, 94, wife of Donald Poet, died peacefully on Wednesday, March 2, 2022, in York. Daughter of the late Earle and Ethel Harnish, she was born in Alexandria, PA in 1927. She received her bachelor's degree in Health and Phys Ed from Lock Haven in 1948. She excelled in sports there and was a member of their first woman's Field Hockey team, as well as a member of the Girls' Basketball team. She was offered a teaching job at North York High School (Central) where she met her husband of 70 years, teaching from 1948-1956. She was a substitute teacher at both Central and Eastern York High Schools from 1961-1975. She also taught Phys Ed part-time at York Country Day School, Penn State York, and York College. During her teaching career she coached Girls' basketball, Girls' Volleyball, Girl's Field Hockey and Track. After retiring from teaching, Lou began working in the catering business for the Altland House for 35 plus years until her retirement in December 2015. Lou and Don enjoyed traveling with their friends from Hellam, cruising with the Hellam Cruisers and attending the York Revolution's baseball games where they were season ticket holders for many years. Lou was a member and volunteer of the Hellam Fire Hall Ladies Auxiliary and Trinity United Church of Christ in Hellam. In addition to her husband, she is survived by a son, Steve Poet (Jennifer) living in Belgium, a daughter Jody Poet, (MB Dwyer) in Delaware; four grandchildren, Matthew Poet, Shannon Zwieg (Pete), Kyle Poet Bailey, and Leah Poet Bailey, and two great grandchildren, Hannah and Penelope Zwieg. She is also survived by a brother, Don Harnish (Helen) of Alexandria. She was preceded in death by her beloved dog, Mitzie. A memorial service to celebrate Louise’s life will be held Saturday, April 30, 2022 at 2:00 p.m. at Trinity United Church of Christ, 200 East Market Street, Hallam, with Pastor Kelly Shiflett officiating. The family will receive friends following the service in the church’s social hall. Memorial contributions may be made to Trinity United Church of Christ, 200 East Market Street, Hallam, PA 17406, or the SPCA of York County, 3159 Susquehanna Trail North, York, PA 17406. Arrangements by the Etzweiler Funeral Homes and Cremation Service, 1111 East Market Street, York, PA 17403.

Louise Harnish Poet, 94, wife of Donald Poet, died peacefully on Wednesday, March 2, 2022, in York. Daughter of the late Earle and Ethel Harnish, she was born in Alexandria, PA in 1927. She received her bachelor's degree in Health and Phys... View Obituary & Service Information

The family of Louise Harnish Poet created this Life Tributes page to make it easy to share your memories.

Send flowers to the Poet family.