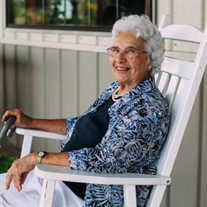 Louise D. Flinchbaugh, 90, passed away, Wednesday, December 29, 2021 at Rest Haven where she resided the past 2 years. Louise was born February 20, 1931 in East Berlin. She was the oldest of 6 children to the late Raymond and Marion (Reynolds) Spahr. Louise is survived by her 2 sons, Ritchie Flinchbaugh and his wife, Sonia and Brian Flinchbaugh and his wife, Diane all of Hellam; 7 grandchildren, Michael Flinchbaugh (Katie), Andrew Flinchbaugh (Katie), Julie Keene (Travis), Ali Lambert (Shannon), and Leeza Flinchbaugh; and 7 great grandchildren, Leah, Annette, Eli and Jake Flinchbaugh, Samuel and Delton Keene, and Heath Lambert. She is also survived by her 3 sisters, Phyllis Spahr and Barbie Mummert and her husband Butch all of East Berlin, and Janet Myers of Peoria, AZ and her brother, Larry Spahr of Gettsyburg. She was preceded in death by her brother, George Spahr. Louise was a 1948 graduate of East Berlin High School. Louise met her husband, William “Bill” Flinchbaugh when she worked in his family orchard in Loganville. They married in September 1949 and had spent 49 years together until his passing in December 1998. They started their married life in Lancaster County on a chicken farm and moved to the current farm in Hellam Township in 1951. They started Flinchbaugh’s Farm and Orchard shortly after moving there. They ran a farm market out of their garage until their son, Ritchie and family built the current farm market. Louise continued to work at the farm market every day until 3 years ago—a job she loved. The farm and farm market were her life. She liked flowers, the garden, and the farm never wanting to venture far from home. She was a member of Trinity UCC of Hallam and the Women’s Friendship Circle of the church and the York County Farm Bureau. Funeral services will be held Tuesday, January 11, 2022 at 11:00 a.m. at Emanuel Lutheran Church, 2650 Freysville Road, Red Lion with the Rev. Paul N. Frank officiating. Burial will be in Kreutz Creek Cemetery. Viewings will be held Monday, January 10, 2022 from 6:00-8:00 p.m. at the Etzweiler Funeral Homes and Cremation Service, 1111 E. Market Street, York and Tuesday from 9:30-11:00 a.m. at the church. Memorial contributions may be made to Kreutz Creek Valley Library, 66 Walnut Springs Road, Hellam, PA 17406, or to Pediatric Cancer Foundation, P.O. Box 785, Mamaroneck, NY 10543 or to Dementia Society of America, P.O. Box 600, Doylestown, PA 18901. Arrangements by the Etzweiler Funeral Homes and Cremation Service, 1111 E. Market St. York, PA 17403.

Louise D. Flinchbaugh, 90, passed away, Wednesday, December 29, 2021 at Rest Haven where she resided the past 2 years. Louise was born February 20, 1931 in East Berlin. She was the oldest of 6 children to the late Raymond and Marion (Reynolds)... View Obituary & Service Information

The family of Louise D. Flinchbaugh created this Life Tributes page to make it easy to share your memories.

Send flowers to the Flinchbaugh family.