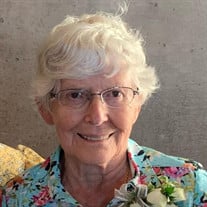 Lou-Rene (Lou) Rinker Myers, 83, was born to Florine and David Lewis Rinker in Cumberland, Maryland and lived in Butler, Pittsburgh, and in York since 1964. She was preceded in death by her husband of 47 years, G. Bradford Myers, MD. She is survived by her children Deborah Widenmeyer (John) of Langhorne PA, Kathleen Raborn (Davis) of Pittsburgh, Bert Myers (Ann) of York and David Myers of Dillon, Colorado. She is also survived by her sister-in-law Barbara Myers Nightingale of Sun City, FL, her grandchildren Connor (Nathaly), Bradford, Kathleen (Morgan), Tyler, Collin, Sarah (Erik), Lewis, Emily, one great-granddaughter Aurora, many nieces and nephews and many good friends, most notably Barb and Charlie Hoopes, who were more like family and stayed by her side until the end of her life. Lou-Rene was a force of nature, kind and energetic, who had a positive influence on everyone around her. Born and raised in Cumberland Maryland, she led many parades as a child majorette for the VFW. Her family moved to Butler, PA when she was a high school senior, where she met the love of her life, Brad Myers. After high school, they married, moved to Pittsburgh for Brad to attend college and medical school, and began their family. In 1964, they moved to York, where Lou-Rene became active at St. Andrew’s Episcopal Church. Over the years, her many involvements at St Andrew’s included being Senior Warden, Junior Warden, member of Vestry, delegate to the convention, alter guild, choir, Episcopal Church Women and organizing most church functions, ensuring that they provided great hospitality. For 40 years in a row, she and Brad hosted the annual parish picnic in their backyard. Lou-Rene was always a great athlete, and she loved her Pittsburgh Steelers and Pirates. During her life she loved coaching baseball, her bowling league and most of all, downhill skiing, winning many medals. A memorial service will be held on April 30, 2022 at 11:00 am with visitation beginning at 10:00 am at St. Andrew’s Episcopal Church, 1502 Fourth Ave., York, PA 17403. Donations can be made in her memory to St. Andrew’s Episcopal Church or to the charity or organization of the donor’s choice. Arrangements by the Etzweiler Funeral Homes and Cremation Service. 1111 East Market Street, York, PA 17403.

Lou-Rene (Lou) Rinker Myers, 83, was born to Florine and David Lewis Rinker in Cumberland, Maryland and lived in Butler, Pittsburgh, and in York since 1964. She was preceded in death by her husband of 47 years, G. Bradford Myers, MD. She is... View Obituary & Service Information

The family of Lou-Rene Rinker Myers created this Life Tributes page to make it easy to share your memories.

Send flowers to the Myers family.