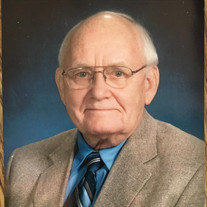 Lewis E. Williams “Lew” on March 28th in his 87th year, began his next journey, earning his angel wings. His chosen and appointed day was Palm Sunday, the day his Lord rode into Jerusalem to shouts of praise and hope. We envision Lew walking alongside Jesus in a grand parade. He is in the “new Jerusalem" now. He was the loving husband of the late Verda Dewar Williams, with whom he celebrated 50 years of marriage in 2008. To say their love story was special would be an understatement. He was the son of the late Helen and William D.Williams. He was also the brother of the late Dr. Jack Williams. Lew graduated from Milton High School and Temple University School of Pharmacy. He served in the United States Navy and his career led him to work as a pharmacist at a small pharmacy near Temple, Pa. He was later employed by Loyer’s Pharmacy in Red Lion and York Hospital for 31 years. Lew initiated and developed the Clinical Pharmacy Services and retired in 1998 as Manager of Clinical Pharmacy Services. In retirement, he was employed by WellSpan for 15 years on a limited basis as a Community Clinical Pharmacist, also serving the Margaret Moul Home. Lew was the recipient of the Joe E. Smith Award for Clinical Excellence from the Pennsylvania Health Systems Pharmacy Association, and was honored as a Fellow in the American Health-Systems Pharmacists Association (ASHP). His article “Reflections on a Career of Making Good Things Happen to Patients” was published in the Journal of the American Society of Health System Pharmacists Oct. 1, 2010. He kept his pharmacy license active until he was 80. He was a loving father, grandfather, uncle, cousin, friend, neighbor and colleague. Many loved him dearly. Lew especially enjoyed traveling to Israel, San Francisco,Yosemite, Sedona, Ft.Myers beach, Cape Code and vacationing with his family in Ocean City, MD and the Poconos. In his later years, he could also be seen riding in his daughter’s convertible with the top down on warm days, often heading to Sam Lewis State Park or to Mack’s for ice cream. There is no doubt Lew was a renaissance man. His creativity was evident with the computer, photography, genealogy, and documenting family history and trips. Handy with tools, Lew even built benches and bunk beds. Lew loved to tell a good story, watch Seinfeld, and reminisce about small town life. Known for being a loyal friend, his loyalty to the Orioles often frustrated him but he continued to wear orange and black. Watching college football, especially Penn State, gave him much pleasure. He enjoyed reading inspirational, historical and sports books. Taking family to see musicals or sharing favorite movies in the comfort of his living room was important to him. He delighted in a good grilled hot dog, toasted cheese sandwich and coconut shrimp. Also a courageous man, he even tried tofu once. Enjoying music from the 50’s-’70’s, attending live musical events and baking chocolate chip cookies for family, friends and church events kept him active and usually out of trouble. His heart was kind and generous, his spirit could be intense, funny and inspirational. His care and passion was evident in his family and profession. He is survived by a son, Michael Williams and wife Denise of Harrisburg, and by daughters Nancy Smith and husband Jerry, Julie Schedin and husband Steve, Jill Fetter and husband Rob, all of York, and special cousins, nieces and nephews, friends and colleagues all across the country. Lew loved children. Also known as “Bubba Lew”, his truest blessing was his grandchildren Deirdre Schedin, Alex and Karly Smith and Benjamin and Hannah Fetter. They all gave him unmeasurable joy, love and many memories that he cherished. He was a kid at heart with them. Lew also got to know many of their friends and delighted in “staying young” while in their company. He was a devoted Christian and a very active member of Advent Lutheran Church, teaching Sunday School and participating in many groups. He was a welcomer and nexus, often taking new members under his wing. His faith was his anchor and his guiding light in life. Lew had a special relationship with and felt great gratitude towards his former Pastors David and Brenda Ritterpusch, Pastor Dan Biles and current Pastor Dr. Rev. Connie Menzter. His family would like to give special thanks to Dr. Joel Winer, Dr. Jack Kline, Dr. Brian Pollack, Dr. Rich Murray and Dr. Moturu for their professional care and friendship over the years. Also, thanks to wonderful care from WellSpan Hospital, WellSpan Rehab Hospital, WellSpan Home Physical and Occupation Therapists, Thomas Hart Family Practice Group and Rest Haven Nursing Home. Your care and love eased the medical challenges and physical losses he experienced in this past year. A service and celebration will be held at a later date. He would want friends and family to be vaccinated. After all, he was a pharmacist. He would love all who knew him to be able to safely attend. In lieu of flowers, memorial contributions may be made to Olivia’s House 830 S. George St York Pa 17403 or Advent Lutheran Church 1775 E. Market St. York Pa 17402. John 3:16 For God so loved the world that he gave his one and only Son, that whoever believes in him shall not perish but have eternal life. Arrangements by the Etzweiler Funeral Homes and Cremation Service, 1111 East Market Street, York, PA 17403.

Lewis E. Williams &#8220;Lew&#8221; on March 28th in his 87th year, began his next journey, earning his angel wings. His chosen and appointed day was Palm Sunday, the day his Lord rode into Jerusalem to shouts of praise and hope. We envision... View Obituary & Service Information

The family of Lewis E. Williams created this Life Tributes page to make it easy to share your memories.

Send flowers to the Williams family.